Our Most Recent Column for the Northcountry News: A Return to the Trails 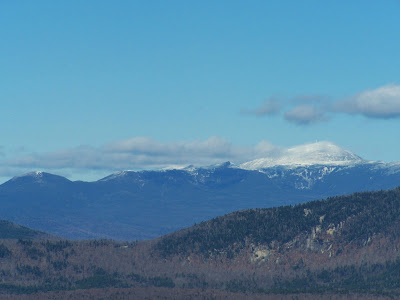 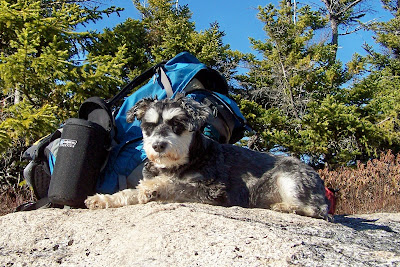 It has been said that the great poet philosophers of past centuries debated over the number of angels that could fit on the head of a pin. For us, the more fitting question is how many angels can fit on a hike without tripping over each other.

Draped in prayers carried forth by a legion of angels from good-hearted people around New England and various corners of the United States, a little dog entered the woods as he always has – with a sprite-like bounce any self-respecting wood faerie would envy. Carefree, irrepressibly joyous, with ears bouncing up and down (his sign of happiness in movement), the scars of his psyche have faded as much as those on his throat. It is as if the attack never occurred and a hole was never ripped in his throat.

Our objective for our return hike was Potash Mountain, the fair sister of Hedgehog Mountain. Yes, I know Potash is not a 4,000-footer, and therefore not a sexy climb to some, but I’ve gotten over my prejudices in such matters, and much to his credit, Atticus never had them. The woods are the woods and the White Mountains are the White Mountains. Besides, while the elevation gain is only 1,400 feet in 1.9 miles, much of that comes in rather steep sections of ledge. My body tells me it is as tough a climb as Hale, Tecumseh or Jackson, and the views to be had on top are far more beautiful than what can be seen on two of the three aforementioned peaks.

We moved easily through the first section of woods and counted it as good luck that everyone else in the full parking lot apparently took a left at the fork in the trail and headed to Hedgehog instead. The stream was high after recent rains so halfway across I picked up Atticus and carried him like a loaf of bread over ten or so feet of rushing water. Once across he shook of the indignity of his portage and once again led on. In that section the trail climbs up through the woods before flattening out again, and so did we. Then we crossed the old logging road (we would take this out to the Kancamagus Highway on the return trip to avoid the stream crossing) and were on our way again, up again.

These are the magical woods of moose and other invisible woodland creatures but in the meditative ebb and flow of my breathing it may as well have been Tolkien’s Mirkwood Forest. I wouldn’t have been shocked to see a wayward dwarf or a fast-fading elf feast just ten trees away. As I wrote before, the woods are the woods. No matter where they are located I find myself transported to my most innocent states when in them. Moreover, since I have this gentle little hobbit of a creature serving as my guide, who can blame me for these little fantastical side trips?

We scrambled up tree-roots and rock ledges kept slick in the shadowy forest and towards a tunnel of light that led us to a ledge with a great view out to Passaconaway. There we sat in the brisk breeze and bright sun, Atticus eating peanut butter crackers out of my hand and then sipping his water; me checking him for any ill-effects and finding none.

From that ledge, the trail twisted and turned along the southern side of the mountain and seemed to go on forever with the last pitch always just around the next corner. After rocky undulations along a thickly wooded area we came to that ankle-testing angled ledge walk. Then came the final steep push up and to the right.

Atticus is always just ahead of me, 10, maybe 20 yards, ahead at most – until we get to the summit. That’s when he hurries forward like a child on Christmas morning, rushing to see what Santa has left under the tree. When I caught up to him he was on the northern ledge catching the breeze with his floppy ears, looking out the Hancocks and Carrigain. When I sat him in the crook of my arm, he could see over the trees and turned his gaze towards white Mount Washington and the clouds sailing rapidly over it like specters on a haunt.

After a spell, we moved out of the wind and took in the view on the leeward side – Passaconaway, the Sleepers, the Tripyramids, the Fool Killer, and the two Osceolas. We made the hike with our friends Ken and Ann Stampfer and their son, Mark, and we sat together eating our lunches. Atticus ate his London broil – you don’t get to celebrate a return to the trails every day – and when he finished he sat and then stretched out above us in the sun.

Perhaps our conversation bored him or maybe he wanted to see what else the mountaintop had to offer, but after a bit he wandered off. When I interrupted him several minutes later he was off on his own on the other side of a small wall of trees and shrubs looking towards Chocorua.

Our return trip was a pleasant walk in the woods in the fading light of the aging afternoon. None of us had a care in the world. We had passed the test in our return to the trails and there was much to be thankful for.

There is a gift in these mountains and I receive it each time I tread a forest path or stand looking at sights I never imagined existed. But a greater gift comes to me in sharing it in silent communion with an a little dog who knows both the light and the dark life has to offer and yet continues to evolve in ways I can only dream of.

Dr. Nick Trout, a veterinarian at Angell Animal Medical Center and author of the NY Times bestseller “Tell Me Where It Hurts” recently wrote something to me. In it was this sentence: “Animals come into our lives prepared to teach, if only those of us on the human side of the bond would be humble enough to learn.”

In my journeys, I am forever humbled by the mountains of New Hampshire and even more so by life lessons learned from a curious little dog who teaches me a great deal about being a better human.
at Sunday, November 09, 2008