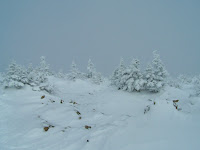 To know the best of January’s mountains is to see them dressed in a gleaming, virginal white under an azure sky. That contrast between heaven and earth shatters me; it blinds me and binds my heart in wordless rapture. It is what drew us out of the warmth of our little hobbit hole to hike on frigid Monday.

Crawford Notch was as it always seems to be in winter: bitter and threatening. The winds shrieked at us to return to the car and subzero temperatures bit at any exposed skin. But we’ve been in the Notch before in similar conditions and I understand the Notch’s bark is worst than its bite and soon we were sheltered by the trees while walking along a well-packed Crawford Path.

We’d left the wind behind but we couldn’t outdistance the cold but it didn’t seem to matter, not when I looked up at the snowy branches against the deep blue background. We were in an enchanted forest and as carefree as can be. But soon, that was to change. The bright aspect of the day was lost and dreariness draped itself over the tree tops and everything turned a lifeless gray. We had walked from a cartoon Technicolor world into an old black and white movie.

Others may say the most difficult part of winter is breaking trail or the dangerous conditions, but because I monitor both and choose the easiest routes for little Atticus in the best conditions, the biggest challenge for me is what happens when the lights go out. It’s not a physical condition but a mental one. All color bleeds out and the cheery magical trees coated heavily in snow become almost sinister. It is no more dangerous than trekking through a troubled dream at night, but still, just as in the dream, I feel it and it weighs on me.

And so when the color left the woods on Monday morning, the journey turned inward. We walked in silence: no sounds other than my snowshoes (not even the wings of the wicked wind flapped above the treetops could be heard); no scents: no vibrant colors – just a walk through a monotone landscape of strange and unusual shapes.

In spite of the more somber mood of the hike I found myself smiling from time to time at the sight of Atticus moving happily along. His purple Muttluks gave him an almost clownish look that was well-suited to the absurdity of his tiny body in these great mountains. How could I not smile? But even that could not warm me as much as I would have liked. I held onto myself by concentrating on by my breathing: the in and out rhythm needed to feed my cardiovascular system.

On my regular 10 or 20 second stops I found myself getting chilled. This is unusual for me. I took another break, put on the hat and gloves and layer I’d taken off earlier and set off again but still it was difficult to get warm. The higher we climbed the grayer, colder and harsher it became. But still, at least there was no wind.

We marched through the long tunnel of trees until at last we came to the curve in the trail where the trees fall off to the left. This is why I chose Pierce on this bluebird day: from this point on the views are beautiful. But where views typically come into place, there was nothing but a gray abyss. Then the wind was on us again. It was so gray it was hard to see. The trees, snow and sky looked all the same. Atticus stopped to let me go first and I broke through knee deep drifts and when we curled towards the trail junction and into the exposed shoulder of the mountain, I was rocked by the wind. We reached the junction and turned up towards the summit of Pierce but even though I’d been there many times before, it all looked foreign to me. The drifts funneled us towards the left, away from the trail, and after a few steps we righted ourselves even though the cairns had been enveloped by the fog.

The wind whipped and raged. Atticus was blown sideways and he staggered like a drunk. I called to him to keep close so that I could shield him from the wind but it robbed my voice from the air and Atti pressed ahead of me up towards the summit as he always does. His little spirit pressed on, as if it had a voice of its own that called out, “Wind be damned!”

I’d never seen gentle Pierce like that before and we hurried to touch the summit cairn. Once on top the wind died a bit and we collected ourselves and I fed my friend thick slices of ham and quickly drank a smoothie for my own strength. We found ourselves surrounded by a winter wasteland of hopelessness. We were just three miles from our car but it may as well have been a thousand.

It didn’t take long before we both started shaking and we set out to return the way we came. Stepping off the mountain’s crown and onto the exposed area again it was like stepping into a raging sea. It was savage, fierce and so overwhelming I was momentarily frightened.

It’s in moments like this that I find myself pushed beyond my comforts and it’s where I find some of the most beautiful treasures. Like all of us, I come from a processed world. The mountains, when they unleash themselves like that and we are taken by surprise; it’s a shock to the system. But in surrendering to it – what a gift to feel as savage as the wind, as strong as the ice and snow covered rocks, to feel one with the mountain even as it tried to shake us off of her. We rode the wind, faced its teeth and I found myself equally unleashed, roaring just as lustily. It was like that moment Walt Whitman describes in two telling lines from his “Song of Myself”:

“I too am not a bit tamed, I too am untranslatable,
I sound my barbaric YAWP over the roofs of the world.”

This time, the wind did not eat my howl. I would be heard.

Time stood still, the wind seemed to freeze in place and I longed to live in that dangerous moment for a few more seconds, if not years, and be wild and unfettered. But madness soon eased and clear thinking returned and man and dog hurried down into the bellowing wind until we stood there looking into a vast gray abyss off the edge of the mountain where the world ended. Once again I stood still on the edge of reason and wanted to feel even more of what surrounded me. I wanted to feel that loneliness and the void. But coldness reeled me in and I realized we needed to get out of there.

We turned onto the Crawford Path and hurried back towards the Notch. Within a few minutes we were sheltered again. We moved quickly, trying to warm ourselves up. When we stopped for the first time we were a mile down the trail and back in the gray woods. From that safe but frozen haven I found the danger above to be amazing. I was awed by its power. I was frightened and exhilarated and fulfilled.

That night, safe and warm in my bed, with Atticus tangled in his favorite fleece blanket next to me, I was stirred by a thought – something Kierkegaard had written: “To venture causes anxiety, but not to venture is to lose one’s self. . . . And to venture in the highest is precisely to become conscious of one’s self.”
at Friday, January 16, 2009

Powerful writing. I've read a fair bit of words about our mountains and have hiked and ventured a lot myself. But this stopped me. Strong work sir!

Thank you, Brenda. I look forward to crossing paths with you some day on the trails of New Hampshire.