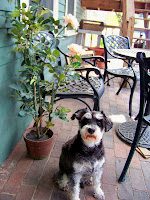 Our life in Jackson has just begun, but I feel as th ough this is the place we are indeed meant to be. Atticus, I'm quite sure, is thrilled to be on his own again, away from other dogs for the first time in eight months. Life for him, is back to normal.
I'm still awaiting Internet connection at the house so we're down here at the J-Town Deli. It's a quaint hangout and there is an interesting clan of locals who breakfast here each morning and solve the problems of the world. Having done that in my past life, I now leave that to others and Atticus and I instead sit outside, on the small brick patio near the roses.
We start the day at 6:00 a.m. with a stroll – a loop just under two miles long through the heart of idyllic Jackson. It takes us by one dog barking to be let off his leash, the local golf course, a covered bridge, through another covered bridge, by a country store, several stately inns, the tiniest but most perfect library I’ve ever seen, and, of course, by a great old church. (Why picturesque New England hamlet would be complete without a pretty white church?) All the while we are serenaded by sweet birdsong and surrounded by hills and mountains colored a thousand shades of green. The traffic is sparse, even on Route 16. It’s that way in Jackson even at the busiest time of the day, which, I imagine is around 10:30 when the locals gather at the post office to get their mail. Many of the people who do drive by are more relaxed than city folk and they show it with a welcoming wave or a nod.
I hope to get out on some hikes this week and particularly look forward to climbing Doublehead, here in Jackson to get a grand view of the town and of the surrounding mountains.

Nice to see you are settling into Jackson NH. Doublehead is a great little mountain. You and Atticus will enjoy it a lot. I can see you hiking it numerous times. I have been up there countless times. We stayed in the cabin for days and skied down Doublehead a few times. You may also try Eagle Mountain up behind the Eagle Mountain Inn. What an awesome view of that area up there. I hiked up it last fall for the first time with my wife and dog, days later to find my wife was pregnant. I will speak of Eagle Mountain as being Hazels Mountain. Yes we are having a little girl to be named Hazel. We hope she will be free as an Eagle.

Fantastic. Then we have something to really look forward in climbing Hazel's Mountain.