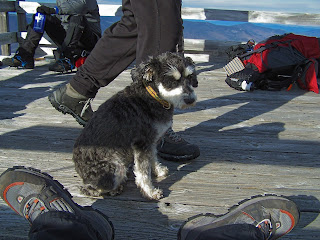 I have no idea what time we topped out but the summit was extremely cold with a wild wind whipping around us as we climbed the summit tower. We didn't stay long.
The trip down was easy going and quick. Heavenly stars above and the stars of Littleton stretched out below us. Breathtaking clarity.
We returned to the base of the mountain 2 1/2 hours after we started out. A quick hike.
The next morning we met with another group to take advantage of the open gate on Sawyer Hill Road. Typically it is locked in winter but the lack of snow allowed us to shave a 4 mile round trip road walk off of our hike. Instead the hike was 10 miles.
For some reason Carrigain is not one of my favorite peaks. It has a remarkable view from the tower on its summit but the climb always gets to me, as do the ankle twisting rocks. I suffered going up, just like the night before, and thought that this is what Lyme will do to me this winter. On the descent we moved easily, although I wore crampons for the upper half of the hike to deal with the ice.
Two mountains down and now a forced rainy rest day.
Photos from the Carrigain hike can be found here: http://outdoors.webshots.com/album/556570890rlWmUH
at Saturday, December 23, 2006

So grateful Mr. Ryan that your body was able to eventually beat the Lyme Disease. I know very few people who would have ever "kept going" the way you did.