My Most Recent Column In The Northcountry News 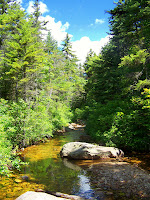 My friend Ann is fond of saying her most memorable hikes are often the ones when the wheels fall off the cart.

Last week Atticus and I entered the woods at the hairpin turn on the Kancamagus Highway. We were with a friend who was up from Portsmouth for the day. We were a mile and a half along the trail and headed for the Hancocks when the wheels fell off the cart. Our friend was moving along well; I wasn't.

I was suffering from a temporary discomfort. I wasn't going to make it to the top of the Hancocks but I wasn't in any danger so I told our friend to go ahead. We'd wait for him. He pointed out he would be gone for about three hours. Not a problem. It was a beautiful day and there were several streams to sit by or in.

Atticus was a bit confused as to why we weren't going on but he soon relaxed when I did. I found a boulder in the middle of a clear, cool stream and took a seat on top of it. Before long Atticus was sitting next to me. We didn't move for more than an hour. What a joy to relax in the woods under the shade of great trees and under a blue sky on a perfect day with no hurry to get anywhere. Time flew by as did my thoughts. They'd settle in for a bit and then like the breeze they'd take flight again.

Before I moved up here this past October my daydreams of living in the mountains had much to do with just such a scene. In the past I always come up for a day or a weekend, and crammed as many miles and mountains in as I could. There was no time to sit by a gentle stream on a summer day. But once I decided to move north that became one of my fantasies, to find myself alone with Atticus in the middle of the woods by a sun-dappled stream with no agenda in front of us.

Mary Oliver, the wonderful poet from Provincetown has a poem called, "The Summer Day". In it there are some lines that kept repeating in my head when I was sitting on that rock watching the water swim by:

I don't know exactly what a prayer is.
I do know how to pay attention, how to fall down
into the grass, how to kneel down in the grass,
how to be idle and blessed, how to stroll through the fields,
which is what I have been doing all day.

That's what it was like to sit there and not fidget or be bored or stressed. It was like a prayer, like we'd fallen into the middle of the woods as if into a dream.

Decades ago I worked for a landscaper who specialized in building water gardens in the yards of the wealthy. In each of them he would incorporate a small waterfall. People paid tens of thousands of dollars for one of these. But here in the White Mountains I encounter such streams on a daily basis. They flow freely along, untouched by human hands. And natural waterfalls, some large, some small, far outdo anything I ever saw made by even the best and most talented man.

Funny, isn't it? We were on our way to a mountaintop, on a day when the views were perfect and the eyes could see for miles and even though we didn't make it we probably had a more memorable hike than had we made it to the top.

Our friend was right, it took him about three hours to go up and touch the summits and make his way back down to us. However, it didn't seem like that long. Instead the time seemed all too fleeting. After all, how often do we get the chance to take our shoes and socks off and dangle our feet in a cool stream as if we are kids on summer vacation again?

I'm all for reaching the top of these storied mountains to see what there is to see, but the summits aren't the only places treasures to be found. In the days that followed our aborted hike I found myself writing better than I had in a long time. And I found myself returning to that boulder in the stream many times a day while I sat at my desk typing away. Sometimes the best adventures are the ones that don’t turn out as planned.
at Wednesday, July 23, 2008

That is good news Tom. I hope your agent does you well. Stay cool! I know you know how to do that well,..by the cool mountain streams. As I sit on my office chair here at work bored out of my "monkey tree" I am a bit jealous of ya. I have the manmade coolness of central ac that gets quite old after hours and hours. Later.

I'm thrilled with what I have learned of Laney and Folio Literary Management. It was great to have options and several offers for representation and to be able to choose from a position of strength.

I'm looking forward to working with Laney. I very much believe she's the right agent for me.