Win a Copy of Following Atticus: Forty-Eight High Peaks, One Little Dog, and an Extraordinary Friendship 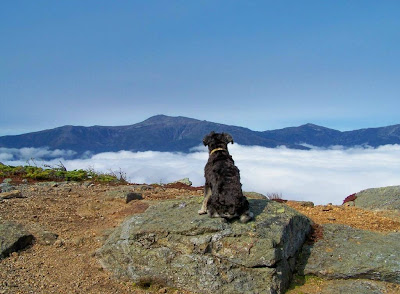 Following Atticus will be published by William Morrow, a HarperCollins imprint, on September 20th and the world will get a chance to meet Atticus M. Finch, a most remarkable little fellow.
Nick Trout, New York Times bestselling author of Tell Me Where It Hurts, writes, “Animals come into our lives prepared to teach, if only those of us on the human side of the bond would be humble enough to learn. Tom Ryan has obviously been paying close attention as he generously shares the wisdom and humanity of his remarkable dog, taking us on a noble quest. Atticus M. Finch is the four-legged mentor all dog lovers will crave.”
I’m humbled by Dr. Trout’s kind words, but more humbled by Mr. Finch himself. Friends come in all shapes and sizes but little did I know the one that would mean the most to my life was a black and white miniature schnauzer who weighed only five pounds when I first held him. It is my honor to tell his story for it is an unusual one. As I’ve said, our book comes out in September, but you have a chance to grab hold of it early. We’re giving away three advance reader’s copies of Following Atticus: Forty-Eight High Peaks, One Little Dog, and an Extraordinary Friendship now! To have a chance at winning, go to our Following Atticus facebook page and ‘like’ us. When we reach 500 ‘likes’ we’ll draw three names from that list. You will then have a head start on the rest of the world.
at Monday, April 18, 2011

Too bad it is only on Facebook and not on the blog or Twitter :/Would have loved to have a chance at getting one of the advance books.

I just hope you will continue this blog and not turn all of your focus on Facebook.

I love your site. We are mini-schnauzer lovers as well. Gretchen, our first Schnauzer, was a road warrier, traveling from Florida to Maine to California. Not all in one trip. We miss her so.

Gracie is with us now. She is young and has yet been on a long trip but we are all ready to go.

I love reading about your hikes and interactions with Atticus. Keep it up.