Make A Difference For Animals In Need: Join Our Unforgettable Winter Quest 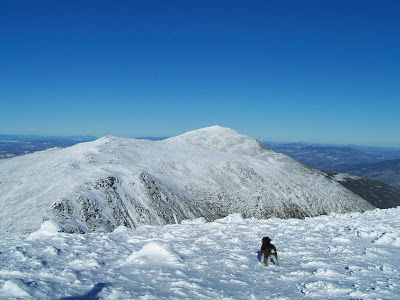 Starting on the Winter Solstice (December 21st), Atticus and I will attempt to hike each of the 48 4,000-footers during the 90 days of winter. We're undertaking this quest to raise money for Angell Animal Medical Center, the great non-profit. Each year MSPCA Angell helps more than 200,000 animals in need. They once helped Atticus, and this is our way to give something back to this amazing collection of good-hearted folks.

Our first goal is one we hope to reach before winter even begins: we'd like to have each of the mountains dedicated by the first day of winter. So far so good. We already have 16 peaks taken. To learn how to dedicate one of the remaining 32 peaks to a special animal, click here.

Today we received a dedication for our first cat, which was something we had quite a few of last time around. Cat lovers, you are way behind the dog lovers so get a move on. Even if you don't have a pet, you may have at one time. Make a donation to his or her memory. Or give a mountain to a friend who has a beloved animal.

Once you make a dedication you'll have a front row seat to what will surely be an unforgettable adventure.

These are the peaks still open for sponsorship: