Spending as much time in the mountains as we have the past several winters I have several pair of gloves. My favorite pair comes from EMS and cost about $30. I’ve had them for four years and time has taken their toll on them. Several small holes and tears can be seen. But I am somewhat fond of them because they were the gloves I wore the winter we climbed 81 4,000-foot peaks. I wear them more than my other pairs because they are comfortable and thinner than the others. Since I don’t get very cold on my hikes I don’t need heavy gloves. They are perfect to bring along on our numerous daily walks around Jackson and they sit loyally by the door waiting for me every time Atticus and I go out.

That’s where they we were waiting for me this morning when I put on my coat, shoes and iPod for the easy 1.6 mile loop around and through Jackson Village. As always they found their way into the pocket of my coat as we headed out the door. But this morning the sun was warm and the day unseasonably pleasant so they were just along for the ride.

This morning I also brought along a few pages I’d written last night. I wanted to review them during our walk and use that review as a stepping off place for the day’s writing. Once we made the sidewalk, which is about 200 yards down busy Route 16, I turned on my iPod and started reading as Atticus and I walked slowly along – he sniffing, me reading. This has been a common practice since we’ve been together. He’s a good dog and doesn’t need me to watch him all the time. And yet we’re so connected that even if I’m reading as I walk I seem to know when to look up to check up on him.

I like these walks we share as they define us a great deal. I like to think they define most great relationships in the world. You see, while we are happy to be together, we each have our own space during that shared time. And so it was that we walked by the golf course, he doing his thing; me doing mine. Just before we crossed the covered bridge, I stopped, not looking up from what I was reading, to take a plastic bag out of my pocket. It was only then that I looked up momentarily to pick up after Atticus. Then we were on our way again.

Half way across the bridge Atticus did as he often does and stopped in front of me and nudged me with his nose. This means he wanted me to pick him up to look at the river. We stayed for a minute or two watching the sun glistening on the Wildcat River as it flowed beneath us. Then it was back to our own spaces, he in front of my some 20 feet checking this and that out, me walking and reading again.

When we got to the other side of the bridge Atticus stopped and was examining something on the edge of the sidewalk curb and I kept walking. After several seconds I realized he hadn’t caught back up and taken the lead as he does whenever he stays behind to check something out. I turned to look for him and realized he was back where I’d seen him last. He was sitting up looking expectantly at me.

I called him but he didn’t budge. I called him again. He still wasn’t budging. I’ve known him long enough to realize he wanted me to come back to him. When I got back to where he was he stood up and put his nose just an inch or two from a brown mass on the edge of the curb. At first I thought it was dog feces but then I realized this little brown mass was quivering. When I got closer Atticus sat back down and looked from me to the brown mass.

It turned out to be the tiniest bat I’ve ever seen and it was clinging to the edge of the sidewalk. It was trembling slightly. Other than that there was no movement. 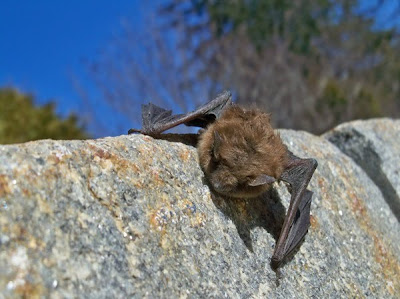 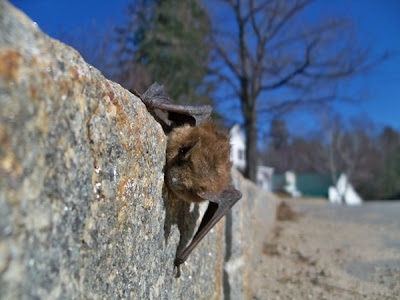 I’m no naturalist but I realized it wasn’t a good thing for this little bat to be out on a March morning no matter how sunny and mild. I just wasn’t sure what to do. And so Atticus and I did what we do when we are puzzled. We sat down together, the bat between us, and I tried to figure out my next step. We sat and thought and sat some more. The little bat wasn’t going anywhere. And every time an SUV or pickup truck rolled by it shook a little more. One thing was clear; I didn’t want to leave it there.

I noticed a large stick just down the sidewalk a few paces. I tried to get the little bat to cling to it but that didn’t work. Then I remembered my gloves were in my pocket. I put one on and took the stick and gently prodded the bat onto my gloved hand. It accepted my nudges and settled in on my fingers. It stopped trembling almost immediately and I could feel it relax. Only then did it lift its head and point it in my direction. 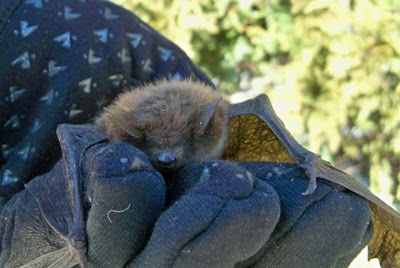 You can just imagine what a funny scene it was to anyone driving by, or to the ladies at Debony Salon just across the way. Here was large guy crouching down like a baseball catcher holding a little brown mass in a gloved hand while a little black and white dog stood on his hind legs and rested his front paws on my knees as he peered down curiously at my glove.

Just behind where we were is a stand of shrubs and in it there is a hole where you can see inside to the network of branches. I took the bat and put it in the hollow, hoping it would grab hold of a sizable junction of branches. No matter what I did I could get the little bat off my glove. It didn’t want to leave the glove behind. I positioned him (or her) in such a way he had to let go and yet he wasn’t about to do that. And so I left one of my favorite gloves under the bat, which was now resting comfortably.

On the rare occasion someone has taken something that belonged to me I’ve comforted myself with the thought that perhaps they needed whatever was taken more than I did. In this case that was abundantly clear. It may have been half of my favorite pair of gloves, but it was this bat’s only glove and to him it was much more than just a glove. It was a bit of security.

I walked away and realized I was walking alone. I turned back to see Atticus peering into the bushes, watching that little bat settling in. When he was convinced all was well with the world Atticus walked back to me and took his place out front and we were on our way again.

When we returned home I called the good people at North Country Animal Hospital and they directed me to the Elaine Conners Center for Wildlife. I left a message with them and am awaiting a call back to tell me what I should do with my friend our friend, the bat. Until I hear back, I imagine it will be settling in for a rest on its new glove. 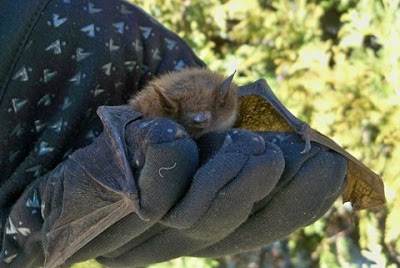 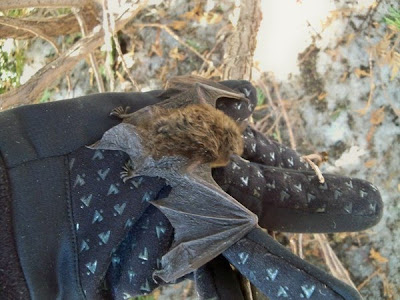 If you are thinking that Atticus and I are kind of sappy when it comes to seeing an animal in need you're right. I'm known to stop the car and get out to help a turtle get across the street. And on one occasion we even stopped traffic to help an prideful toad cross the Kancamagus Highway.

You may have heard of white nose syndrome, which is a fungus that is either directly or indirectly killing hundreds of thousands of bats in the Northeast. Biologists think the fungus may cause the bats to wake early from hibernation -- it may make them itchy. Once they are awake they need to feed and start flying about looking for insects, which are not out in winter, so they starve.

Bats with this disease have a whitish fungus on their nose and on other parts of the body. I could not tell from your photos if the bat you had might have had this fungus. It could have just woken up too early or been disturbed from its winter roost in a barn or house. Once disturbed from sleep they may not be able to get back to their hibernating spot.

I wonder if you wandered back to the shrub this morning and if the bat (and your glove!) were still there.

Maybe more than you want to know at the NH Fish and Game website on white nose syndrome -- http://www.wildlife.state.nh.us/Wildlife/Nongame/bats.html

Glad that you and Atti are attentive to wild friends.

Yes Ellen, I received a crash course in bats yesterday. I was all over the web and read about White Nose Syndrome.

The Elaine Conners Center for Wildlife couldn't help me but they put me in touch with Maria Colby at Wings of Dawn, who then put me in touch with a woman over in Twin Mountain who was going to take the bat in. But by the time we went to collect the bat (about 2:00pm yesterday), it was gone, but the glove was still there.

I'm hoping the bat found its way back to wherever it was sleeping. I was wondering if perhaps it's bedroom is the Jackson covered bridge, which was just 20 yards from where Atticus found the bat.

There has been a significant number of bats reported out this winter. The NH biologist I spoke with asked me to report them, and I wrote this post on Views: