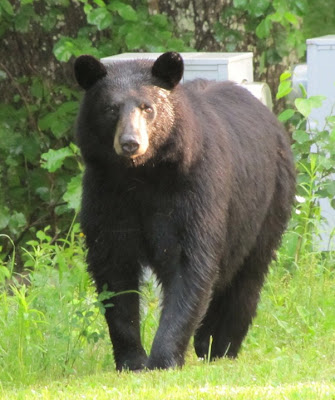 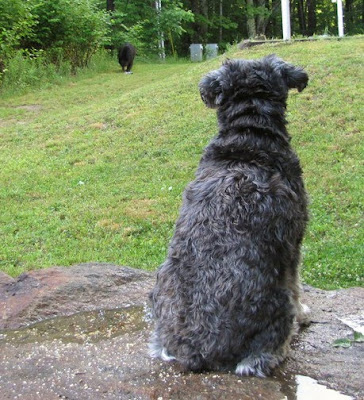 He's a big old boy and a regular around these parts because of the restaurants in the area. He stops by two or three times a week, usually to tip the grill over so he can get to the grease pan. Other times he sits and grazes on the grass.

This afternoon, while I was in the tub reading Joseph Conrad's "The Heart of Darkness", while Atticus slept on a blanket beside the tub, we heard a loud noise outside the backdoor. By the time I got up and out of the tub and into the kitchen I saw Butkus walking away with our bird feeder.
I stepped outside and said, "Hey, Butkus...drop it!"
He turned to see me, dropped it, and then trotted towards the woods. But when he realized Atticus and I weren't chasing him and were just sitting down to watch, he returned. (That's a shot of him returning.)
I'm always happy to have Atticus as my friend, but as I've always said, there's something different about this little guy. Really now, how many dogs will sit and watch a bear with you and not go crazy? No barking. No whining. Just sitting and watching.
Earlier today he sat next to me as I fed a baby red squirrel out of my hand while its mother watched us from 10 feet away. There are times I'm more amazed by the little dog than the bears, beavers and moose up here.
To make matters even more exciting, as Atticus and I sat down to watch Butkus, a hummingbird buzzed right next to my head. (Okay, you hissy fit throwers, get ready to throw another because I've yet to put up the hummingbird feeder, but it's going up tomorrow.)
Any way, now you know Butkus. You've seen his photos before, but you weren't properly introduced. That's been taken care of. I'm sure you'll be seeing more of him in the future.
PS: In case you aren't aware of the name Butkus...as a kid he was my hero. Dick Butkus, that is. He was the middle linebacker for the Chicago Bears.
at Sunday, June 06, 2010