Fat Man Gets Ready To Roll 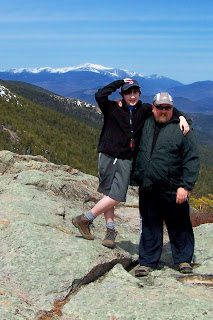 This weekend, Dave, the editor of the Salem (MA) Evening News, starts his quest to hike all 48 of the 4,000-footers in the 90 days of summer. He’s using it as a fundraiser for Kestrel Educational Adventures.* He'll be joined on many of his hikes by his teenage son, Luke, a budding photographer.

Atticus and I first ran into Dave and Luke last summer on the Champney Falls Trail on the way up Mount Chocorua. They were a pleasure to talk with and the father and son bond between them was enjoyable to see. (Actually they appeared more like friends than family.) I enjoyed the brief interaction we had with them on the trail, and then later again on the summit.

When I discovered Dave’s blog this spring, I had no trouble remembering them. Soon after seeing it we ran into them again on South Moat.

Knowing what I went through four years ago when first hiking the 48 in 11 weeks, I can relate to the quest Dave is about to embark on. I’m hoping it is as rewarding for him as it was for me. It’s one thing to hike 48 peaks; it’s something entirely different to force them all into a short time period like the 90 days of summer. The intensity of the schedule makes it all the more intoxicating and it is hard not to become obsessed.

I have an idea of what Dave is about to go through. I was the editor of my own paper when I did it and working in the news business has a tendency to give you a bird’s eye view of the shortcomings of the human race. Throughout my quest that dissolved. I began thinking less about man’s shortcomings and more about the promise of Nature. I thought less about what was wrong with the world and more about what was right with it. It wasn’t eye-opening, it was soul awakening.

One of my favorite books is Sam Keen’s Hymns to an Unknown God. In it Sam talks about how as a minister and as a therapist he realized the people he was counseling were all looking for the same thing. They wanted something greater than themselves to surrender to and be part of. I found it four years ago when I came north and surrendered to the mountains. You see, we don’t conquer a mountain when we climb it. It’s the other way around. It conquers us. Once you’ve experienced a peak, it never leaves you. Surrender to the intensity of a summer of peakbagging and it becomes life altering.

I look forward to following Dave’s quest and perhaps Atticus and I will even get to join him on a hike or two this summer. We shall see. If you wish to follow along check out his website and get ready to root on the Fat Man of the Mountains.

*Through its classroom, outdoors and after-school work, Kestrel Educational Adventures connects hundreds of kids across the North Shore to the natural world around them, encourages thinking about nature as a part of normal life rather than an exotic destination, and nurtures the next generation of outdoors stewards.
at Tuesday, June 16, 2009