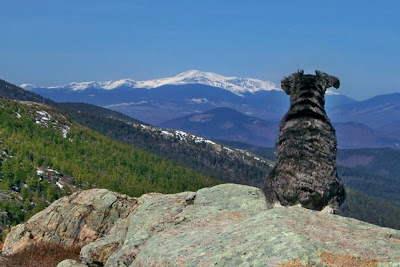 The other day I woke up to Atticus curled up next to me, his head snuggled between my arm and chest. He was still asleep and I watched the slow rise and fall of his body. Sweet contentment. I treasure such moments for whenever I see him like that it draws me back to an innocence I must have known at one time before I grew up and lost the ability to have the same kind of carefree, blissful moments. But just like that, just by watching him, they begin to come back. For Atticus, in so many ways, is my mirror. I see myself reflected in his eyes and his actions – at least I see the way I used to be. In him I see virtue, purity, wholesomeness. And in that moment, as soon as those visions appear I feel them again and once again they are real.

Some think it strange that I use Atticus as my barometer, but as I recently told a friend, so long as I take care of him and make sure he has the life he wants, I find myself leading the same kind of wonderful life. In his innocence, in his carefree manner, I find my own.

We lay there, him sleeping, me watching him sleep. It was warm and a lazy haze hung around the mountains making it feel more like August than April. A breeze stirred the air and cooled us and sent a butterfly looping happily through the air. Mozart played on my iPod and I was filled with tranquility.

When Atticus finally awakened he sat up and stretched out his neck as a coyote does when he points his snout to heaven and howls at the moon. He then got to all fours, dropped down into the yoga position known as the “downward dog” with his fanny up in the air and his front paws stretched out far in front of him, his chest nearly touching the ground. Eventually he sat up again while leaning against me. He didn’t look at me, but off into the distance. Sleeping time had become sitting time. The Presidential Range looked like a dream in this August/April haze. As is his custom Atticus then sighed and just sat and looked – the perfect little Buddha – and he didn’t move for the longest time.

You see, we weren’t in a bed, but napping on top of the bald ledges of South Moat. That’s the kind of day last Saturday was. There was little snow to be found on the trail and the summit was mostly free of people. After reaching the top we drank and ate and then sat against a rock. Eventually I turned on my music and the two of us drifted off.

It was a remarkable day atop one of the most astonishing summits in the White Mountains. There are few views that are better than those you receive as a gift for climbing the Moats. And yet I know many friends who have never climbed them and perhaps never will even though they’ve climbed hundreds of mountains. In the all too common predilection of many hikers in the Whites, the Moats just don’t cut it. Not when it comes to splendor, because the views from on top are stunning. And not when it comes to their own beauty, for some of the best artists in the world came to New Hampshire to paint them in the 1800s. Unfortunately, to many modern day peakbaggers the Moats just don’t cut it. But the three Moats shouldn’t take it personally because neither do such treasured places as Chocorua, Welch-Dickey, Pemigewasset, the Doubleheads or the Baldfaces - to name a few. None of them is a 4,000-footer and therefore many don’t bother with them. I feel sorry for those who forsake these beautiful peaks as they do their best to keep up with each other, playing a game of follow the leader.

Several years ago Gene Daniels, once the co-editor of the Appalachian Mountain Guide and an AMC trip leader, had been hiking for so long that eventually he became the first known person to hike each of the 48 4,000-footers in each of the 12 months. After Gene did it, another fellow did it. Then another. Then a couple of woman. Now there’s a herd of hikers playing follow the leader. They call it the “grid” and it consists of 576 peaks, or just doing the same 48 12 times – once in each month.

I knew a fellow who on a picture perfect day crossed the Pemigewasset Wilderness while climbing Zealand and the three Bonds, a hike known as perhaps the most breathtaking in the Whites. He explained that he only did it because he “needed it for this month”.

“I’d done them last month, too, so it was kind of boring but at least I get to check them off the list for this month.”

I asked the same fellow why he came to the mountains to hike every weekend. He said, “It’s my way to get away from the rat race. Here I can feel free.”

Not to knock him, but I pointed out that he had simply left one rat race to join another. In his own way he was still trying to keep up with the Joneses. He was simply doing something because so many others have done it and by the time he finished his ‘grid’ even more will have finished in front of him.

The ‘grid’ is a curious affliction. Its symptoms are monotony, a lack of imagination, and a desire to do what everyone else is doing. But then who am I to poke fun of these people who follow each other over the same peaks again and again, typically in the company of others to fend off the boredom or the sound of silence?

I’m no better. I’m a follower myself. The only difference is that I follow this floppy-eared little mountain dog up and down various peaks. But at least we don’t see a parade of people on those peaks since many of them aren’t 4,000-foot peaks.

As is often the case when Atticus and I sit on top of a mountain, Ralph Waldo Emerson comes to mind: "Whose would be a man must be a nonconformist.” He obviously wasn’t working on the ‘grid’.
[*What would Ralph Waldo Emerson do?]
at Friday, April 09, 2010

Thank you for this fine column, Tom. Pursuit of the Grid mystifies me. Indeed, pursuit of what I call "accomplishment hiking" in general mystifies me. (But then I've done the 48 too, so of course I'm a hypocrite about it.) On the other hand, I'm happy people find their own reasons for enjoying the mountains. Mine don't happen to include setting records or stuffing the peak bag, but if a desire to do so puts people on the trails, then I'm for it. More people on the trails means more environmentally conscious voters, I think.