A Different Kind Of Mountain 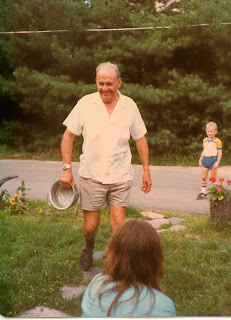 Atticus and I spent five hours with my father today. For several of those hours he had no idea who I was. He made the move from the hospital to the nursing home and actually seems to be doing worse. It is so strange to see this powerful man, alone, broken and bitter.

I asked him a lot of questions today to see where his mind was, or if it was there at all. He didn’t remember that he had children, never mind nine of us. But slowly he remembered as I went down the list of names with him.

It was sad, sometimes comical, sometimes insightful. He had some nice things to say, but mostly not so nice things. I did not take them seriously and instead stayed longer than I thought I would.

While reviewing the names of his children I told him the name of one of his sons or daughters and asked him about that person. Again, it was sad, sometimes comical, sometimes insightful. There were glimpses of his true feelings mixed in with dementia. He was convinced that his youngest son, Tom, was married and had a child.

He paused and puzzled and his thoughts took him elsewhere.

“What is his wife’s name?” I asked again.

Again a pause as he searched through what I imagined to be cobwebs much like one would find in his house. (I often equated his house, the house I grew up in, in the nearly 40 years since my mother died, to be much like Miss Haversham’s from Great Expectations after she was left at the altar.)

Upon hearing his name Atticus looked up at him. My father returned Atticus’ curious look and settled back into his thoughts and then disappeared into those cobwebs again. After a while he looked at me and said, “Who are you?”

It is disarming to have your father look at you with a blank but worried look and tell you he has just soiled himself. And we have come full circle now in that I toileted him and wiped him just as he used to toilet and wipe me. And later in our visit when he was back in bed and soiled himself once more I changed his diaper just as he had once changed mine.

The most heavy-hearted moments came when I first walked in his room and he was attempting to crawl over the side rail of his bed. He recognized my face but didn’t know who I was as he looked on with pleading and horror, “Please…please help me get out of here.”

Soon after, once I had him up in a chair and a bit more comfortable he asked me, “Is my mother still alive?”

“Why do you feel bad for them, Jack?”

“Because they don’t know their father…and because he doesn’t know them.” But there were no tears. There was no time for that. There are times when we are weak, when we may want to weep, but it’s our turn to be strong, time for the son to be the father.

After I got him out of bed with the help of a nursing assistant, he was disoriented, in pain, and confused. I know he likes ice cream. No, he loves ice cream. The nurse came in to check on him and I asked her, “Do you have ice cream here?”

“Can you get some for my father please?”

“No. We don’t let them have ice cream until after they have dinner.”

I surveyed this woman with an incredulous look on my face. She was somewhere in her early 50s I guessed, not a very happy woman. I asked her, “Tell me, when you are 87, how will you like it when someone forty years younger than you tells you when you can and can’t have ice cream?”

She looked at me blankly, not sure what to say.

“My father would like some ice cream. Thank you.”

She left the room without a word and came back with a victorious look on her face. “Mr. Ryan isn’t allowed ice cream, he’s on a pureed diet.”

I held my cool. “I’ll tell you what, where do you keep the ice cream, I’ll get him some.”

She left and came back with something that wasn’t ice cream. It looked like sherbet and she told me it was allowed. My father couldn’t operate the spoon too well so I did it for him. After a couple of spoonfuls I asked him, “How is it?” He looked at me with disgust, “Tastes like sh**.”

Atticus and I then left for a little while and drove to the local grocery store. When I returned my father was delighted to see I had chocolate and vanilla ice cream for him. It was only after he had a bowl that he seemed to regain his composure and seemed to recognize me from time to time.

At one point dad looked at Atticus and said, “Atticus is a good dog.”

My father was more adept with the belt than he was with hugs and then added, “He’s better than you deserve.”

At a younger time in my life I would have left the room wounded. However, tonight I looked at him and said, “You’re right, he’s pretty special.”

When I left, not too long after that, I kissed him on the forehead as he fought with increasingly heavy eyelids.

Sometimes in life, it is clear; the mountains we have to climb are not outside nor covered with snow or ice and there are no maps to show us the easiest way to get where we are going.

After a long ride back in the dark, it feels good to be home with my ‘dark-haired son’ squeezed up against my side as I lay in bed writing this.
at Tuesday, March 11, 2008