For One Hiker, The Ulitmate Peak 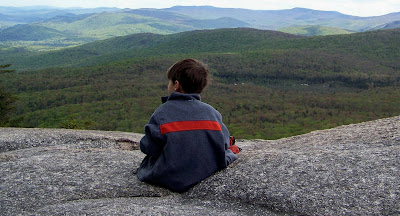 My six year old friend Patrick is a good boy…most of the time. When he’s not a good boy there’s little he can do about it. Suffering from bi-polar disorder is hell on the little guy. It’s also hell on his family. There are times when the house turns into a war zone as it was Saturday morning. He exploded, then imploded and collapsed into an exhaustive sleep on the couch, leaving his family in shambles as is often the case.

When he woke up I told him I was taking Atticus for a long walk and invited him to join us. As always, he jumped at the opportunity to be with us.

Taking a walk with Patrick is an interesting experience. He is six going on 76. He is brighter than most kids, very manipulative, and not as physically active. His imagination runs towards the dark side of things and he harbors irrational fears. At his young age, he likes to be in control. Part of the challenge of having a relationship with him is in knowing this and finding ways around his control issues.

And so on Saturday we set out for a long walk in the woods. We parked at the Flume Visitor Center, walked for a short way along the bike path, and then turned left onto the Mt. Pemigewasset Trail. When we walked under the three bridges Patrick wondered if anyone had ever been killed there or what creatures lived in the underpasses when night fell. Upon entering each one he’d yell violently in an attempt to frighten away whatever evil lurked nearby.

We trundled through the open woods, crossing a bridge, hopping over a stream, balancing our way across primitive log bridges further along. We talked a little but mostly soaked in the surrounding nature. Where I had seen wildflowers just days before, I saw only their green remains. But the forest had woken up in other ways. The wind rustled the trees and young leaves and kept the black flies at bay.

Patrick, Atticus and I had been on this trail before. We had twice tried to climb to the top of Indian Head, the jutting profile he sees from his house every day. But on both occasions he chose to turn back. Because of this he has a love-hate relationship with hiking to the top of a mountain. He wants to get there but he doesn’t like the discomfort associated with it. Our two failed attempts came last year. When we turned back he talked of incredible pain which I later learned was just his way to control the situation.

On our walk, we were about a third of the way up the trail when he once again suggested he was hurting. He described stabbing pains in his legs and belly. I suggested we sit for a while. When we started up again he did well for a few minutes but wanted to sit again. I gave him some chocolate. It helped his pain. He wanted more.

I agreed, not to the chocolate part, but cocked my head until he asked what I was doing.

“I’m just making sure it’s okay to go back now. I think bears are following us.”

Patrick then suggested we continue on our way.

“No, I think I’m fine now,” he replied, while looking back over his shoulder.

We reached the halfway point and he wondered if the bears were still behind us. I suggested there was one way to find out. We could return the way we came. Instead he led the way up the trail, eyes wide, and certain to keep me between the bears and him.

Eventually he decided he’d rather face the bears than be tired. I coaxed him along telling him about the views we’d see on our walk.

“When we get to the viewpoint we can turn back then.”

But views to a six-year old with bi-polar disorder mean very little. It wasn’t long before he suggested we turn back again. We sat for a bit, Atticus sitting right in front of Patrick, appraising him as only a wise little dog can do. This led to an interesting conversation – albeit a one-way one.

Patrick: “Atticus, I know you want to walk, but I’m tired.”

Atticus: [He sat and stared at Patrick.]

Patrick: “I know you want to get going but I want to go back. I’m sorry. I didn’t mean to ruin your walk.”

Patrick: “Oh, okay, we’ll keep going, but you owe me one, Atticus.”

Atticus: [He looked at Patrick for a moment then headed up the trail.]

In a few minutes Patrick was falling behind in a sulk. Then as fate would have it, three young women appeared, making their way down the mountain. They fawned over both Atticus and Patrick. This sat well with Patrick and seemed to matter little to Atticus. After they left Patrick asked me, “Will there be more girls at the viewpoint?”

“You mean with fevers?”

What a mind. “What do you know about hot girls?”

“I know you can think they’re hot, you just can’t tell them that.”

Just my luck, I was in the woods with a six-year old who knew more about women then I do. As you might guess, we pressed on.

When we left the leafy trees behind and entered into the evergreens, the cool scent of earth and greens refreshed us. We moved a little quicker, Patrick, I imagined, in search of hot girls, and me not wanting to slow down while he was enthusiastically climbing. (Hey, we get our motivation where we can.)

After we reached the intersection with the Indian Head Trail I decided to tell Patrick what he was in the process of doing.

“Patrick, do you remember that mountain you’ve always wanted to climb – Indian Head?”

“Yes, do you think I can climb it with you and Atticus this summer?”

“No, I think we should climb another mountain this summer.”

He stopped in the trail and looked cross with me, “But I want to climb Indian Head.”

I smiled and paused. Then I said, “You just did. The summit is just ahead.”

Now if you know anything about six-year olds with bi-polar disorder you know more than many of the experts do. First off, it has to be really bad to be detected at such an early age. Then, when they do, a life of hell is fully documented and much of what comes out of it is what such a troubled child cannot do. They are separated in many ways, an asterisk placed next to their names in everything they do. Because of their behavior, children like Patrick don’t always get to do the things they wish they could do. The demons are just too loud, too lively as they dance in their troubled heads. It is for this reason that I was happy to have given up my plans to be on Moosilauke on this bright, blue day.

In all the mountains Atticus and I have climbed these past three years, none gave me the satisfaction little Pemigewasset did at that moment when Patrick forgot about his demons, forgot about restrictions – those he places on himself and those placed on him – and he thrust his arms up in the air as an Olympic champion would and let out a triumphant howl. Such unmitigated joy! Such freedom for my little friend! He let out two more howls and did a little dance.

In watching Patrick burst through that last stretch of woods toward that doorway to a mountaintop world where ledges fall off to reveal a sea of mountains, heaven on earth and the place where dreams come true, I don’t think I ever felt so happy about getting to the top of a peak.

In watching him sit on the ledges – after surrendering to his fear of heights – I wondered if this little boy will ever have as triumphant and yet peaceful a moment as he found that day, sitting with a little dog next to him, the world before him, and for once, his limitations far behind him. He sat and looked, as did Atticus, out across the mountains while I watched these two six year olds.
In watching them I thought of something written by Thich Nhat Hanh, the wondrous Vietnamese monk: “People usually consider walking on water or in thin air a miracle. But I think the real miracle is not to walk either on water or in thin air, but to walk on earth. Every day we are engaged in a miracle which we don’t even recognize: a blue sky, white clouds, green leaves, the black, curious eyes of a child – our own two eyes. All is a miracle.”

Here in the White Mountains the legends I care about are those of the mountains themselves, they are the stars of this show, and on occasion, we get to experience that anew through fresh eyes.
at Tuesday, May 27, 2008

This is awesome, Tom. Just awesome. Wonderful insights, and I was right there with the two of you. What a gift you gave him on that day.

What a great story. I have very limited experience with bi-polar disorder and I appreciated the intimate look into a child dealing with it. You also outsmarted him very well :) Hiking and being in nature helps to cure/calm a lot of ailments I think.

My Mother had severe bipolar and I looked after her for 30 years. It nearly destroyed us both. Nature is both miraculous and hideously cruel. Or rather, it is what it is. Walking has saved me more than once, and is still saving me. Onward, by all means!