"Little Buddha" Sits with the Sea 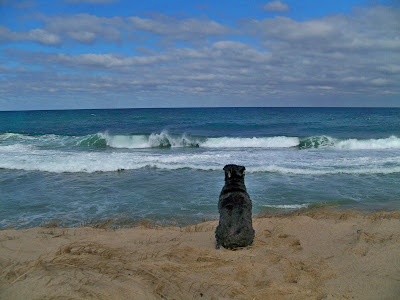 Today we cobbled together various sections of the Provincetown bike path to create an 8-mile loop through the dunes. We started at Herring Cove, made our way over to Race Point and an hour long visit sitting on the breezy dunes watching the ocean, towards the Beech Forest and then headed back to Herring Cove.

The loop offers a little bit of everything (woods, ponds, dunes, ocean views, wonderful twisted pine trees) and the rolling hills offer a great walking workout. It was made all the prettier by a little fresh snow here and there.
When we reached Race Point it was windy but that did not deter Atticus from his 'little Buddha' sitting. (Notice his ears in the photo.) I didn't time him but he was in front of me for about 20 minutes watching the waves crash and the water recede. I'm not sure what he sees or looks for when he's doing this but it's clear it's not just a mountaintop thing. It happens wherever he has a view. As for what he sees, Atticus had a follow up with Dr. Dan Biros at Angell last week and all is well with his eyes. This is evident not only in this photo but in the photos you'll see in the slide show that's about to be put up. Check out some of the close ups and the intensity of his gaze and you'd never guess he was once nearly completely blind.
at Wednesday, February 17, 2010