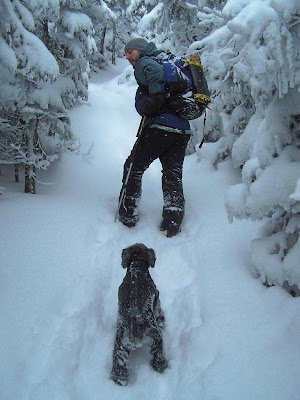 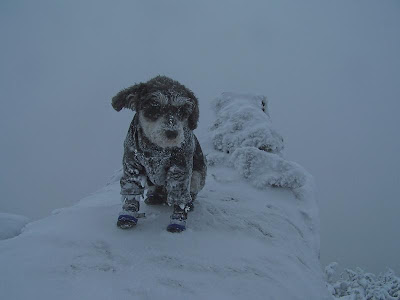 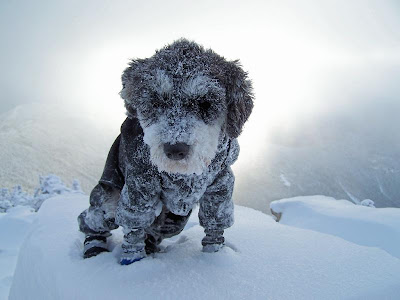 This morning we woke up to another gray sky and more snow on our back deck and it is still flurrying and will be on and off all day. The forecast is for gray, gray and even more gray for the next week a week. No postcard skies up here, no bright sunshine turning the snow a brilliant white under a deep blue sea of a sky. If this were a movie Bill Withers’ “Ain’t No Sunshine” would be playing in the background right about now.

The forecast today is for another 1-3 inches. That’s in the lower elevations. Not sure what it means up high. A month or so ago I wrote about a trip Aaron Lichtenberg joined Atticus and I on over the Twins and Galehead last winter. The forecast called for clouds and a chance of snow showers. We started out under partly cloudy skies while hiking along the Gale River Road loop. Clouds slowly drifted in. Halfway up the Gale River Trail it began to snow in earnest. A half hour later it found no importance in being earnest and it was coming down in a healthy display of winter weather. By the time we reached the summit of Galehead it was snowing heavily and we were breaking through some deep snow. The steep climb up South Twin, a physical test on a beautiful summer day, was a slow slog through a foot of deep powder.

The summit of South Twin was pretty much windblown but there were deep drifts caught in the rocky crags. The trail from South Twin to North Twin drops down into the trees and in the new fallen snow it was tough to see where the trail went. We waded deeply through the snow. Atticus boots were freezing so I had to put on a new pair and they too eventually started to freeze. By the time we got to North Twin the snow dissipated and became only a slight flurry again followed by the struggle between clouds and sun, won by the clouds, on our descent along the North Twin Trail.

We had slogged through all kinds of new, deep snow that had fallen just that day; snow so deep it seems like it should have taken days to fall but that wasn’t the case as the trail had been beaten into submission the day before by a herd of snowshoers the day before. However, by the time we got back down to our waiting car at the end of our long loop hike, it hadn’t snowed more than a tenth of an inch.

Nuisance showers down below can mean a lot up above. But the snows of the last couple of days have not been nuisance showers. They’ve been storms. Up high I’m guessing there’s already close to two feet of unbroken snow on the 4,000-footers. Things are locked up pretty good.

Atticus and I will set out to find some place to hike today but I’m not too optimistic much will be broken out. Our proposed hike up East Osceola and Osceola has been cancelled due to the fact that with only three of breaking that steep trail up East Osceola, one of the steepest we’ll see this winter, I didn’t think we could do it justice and keep moving at a good enough clip to keep the little bug warm, even in his body suit. Tomorrow and Appalachian Mountain Club group will be stomping out that route so it made more sense to wait for them as there is strength in numbers.

This is one of those situations where I hike differently with Atticus than I would on my own. Heck, if it was just me I’d say let’s go, and if my friends couldn’t make it I wouldn’t mind giving it a go myself. But with Atticus it is a different ballgame altogether.

Tom Jones and Gary Roberts will not be coming up today; my call, not theirs. Instead they will come up at some future date. This disappoints all of us as they were really looking forward to it and I am a bit heartsick for some friendly faces back in Newburyport. It would have been nice just to see them to shake off this week’s cabin fever.

We’re off to see if we can find an ambitious, large group of hikers who have been busy breaking trail. I doubt we’ll find it today, but tomorrow is the weekend and it will be busy up here on both days.

Thanks for reading along and I’m sorry there has been so little to write about this past week. It will get more interesting this next week. Thanks for your patience.
at Friday, February 08, 2008