Moriah Was Hiked For Koa 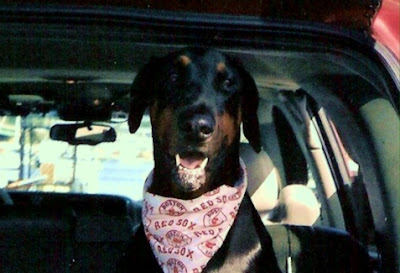 Returning from our hike up Moriah this afternoon, we stopped at the Mountain Wanderer and Steve Smith gave me the good news on the missing hikers. I thought about them a great deal today before I was given the news. Moriah is not all that far from where they started their adventure by climbing Madison first.

Atticus and I started our hike under pleasant blue skies, crossed the bridge at the trailhead and just like that the sun was gone. The day became gray and somber, and the higher we climbed the more the clouds seemed to sink down upon us until we reached the junction of the Stony Brook Trail and the Carter-Moriah Trail. That’s the 3.5 mile mark. From there it is a pleasant and often breathtaking ledge walk to the summit of Moriah. But not today.

The footing was fine. Others had hiked the trail this weekend and broke it out. Yesterday’s rain and warm temperatures softened the snow and it sank upon itself somewhat, only to harden up overnight. So long as the little bug and I stayed on the trail we were fine. If we stepped off the trail I postholed. So did little Atticus. He’s not used to sinking in that deep. Typically he scurries along on top of the snow if he walks off the trail. But not today.

The ledges leading up to the summit of Moriah are quite beautiful and it is one of my favorite sections in the Whites to hike. But while trekking through the belly of a cloud there was nothing to see. And this particular cloud seemed cold and damp and I could feel its tendrils seeping into my joints and eventually my spirits.

It is such a different experience to hike under the bluest of skies as we had on the most recent Hancock hike. Today’s experience was in stark contrast to that one. No views, everything looked gray, and when the snow flurries started so did the wind and no matter which direction we walked it seemed to be blowing right at us.

Today was a fine example of what is negative about peak-bagging. Normally I wouldn’t have hiked Moriah today. No, not because of safety issues, for we were safe as can be, but because I’d prefer to hike the ledges on a day with better views. As of today there are only 30 days left of winter and we went into it needing 20 hikes to complete our goal. Nothing else really fit with what I wanted to do today so I chose Moriah. Don’t get me wrong, nearly any day I get out in the woods with Atticus is a fine day, but some are better than others.

It was somewhere along the descent, soon after we jumped off the Carter-Moriah Trail and were back on the Stony Brook Trail while we were moving along at a pretty good clip that something happened to change my attitude.

We were clip-clopping along, dog and man, my snowshoes slapping the hard track, and I was in a hurry to descend from the grayness and shake off the cloud’s gray fingers that had been reaching out to me for the better part of the hike. Out of nowhere a thought arose and a smile was born and the two may have even copulated to form a laugh, or maybe I just thought I heard myself laughing.

The thought that brought the smile that joined with the thought to create the laugh was that on this very gray day two unlikely hikers were making our way down our 44th mountain this winter. Unlikely? Sure we are. He’s too small, I’m too big. I’m middle aged, still somewhat new to hiking, never mind winter hiking, and not in the best of shape. He is not a thick-coated dog, and has hair instead of fur; and last April he was going blind and we feared the worst when the idea of thyroid cancer surfaced. For eleven years I sat behind my desk and wrote about the provincial politics of Yankee City, taking on those who were ethically challenged and praising those who were above the curve in that category. Never would I have thought that the two of us would end up moving north, giving up that life I knew so well, and decide to do something as preposterous as this quest for 96 peaks.

And it got better. Today we hiked Moriah and it was dedicated to Koa, our friend Joyce’s dog. Koa is not doing all that well as of late and Joyce and I have been writing back and forth concerning Koa’s old age and his ailments. I fear for Koa and I fear for Joyce and her husband when the day of his departure eventually come.

But here we were, these two unlikely hikers, having the honor of climbing to the top of one of New Hampshire’s 4,000-foot peaks in honor of a well-loved dog. How special is that? And I have to tell you, I do believe it is an honor. And it’s not just that we can climb Moriah in the first place, but that we carried Koa and Joyce and her husband with us today. And to be able to do it in such a way that benefits an organization like Angell Animal Medical Center makes it even better.

During this quest it is easy to forget we are up here because we love it up here, especially during a week when three different rescues have taken place, and if I’m not careful I would also forget why we are doing this, who we are dedicating it all too, and the place it benefits.
In the middle of that cloud, even as a fierce flurry of snow unleashed upon us while we moved down the trail, I couldn’t help but feel better, brighter, and even a bit joyous about this grand adventure we are on this winter.

So here’s to Koa, and Joyce, and Jack and all the other wonderful animals we are hiking in honor of and in memory of; and here’s to those people who love or loved their dogs, cats, horses or birds enough to remember them in this way; and here’s to the 90 day journey, may we never forget it or those we are walking for so long as we live.

Thanks for coming along for the journey.
at Tuesday, February 19, 2008