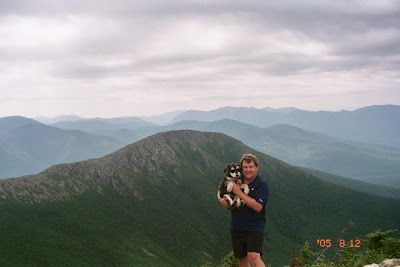 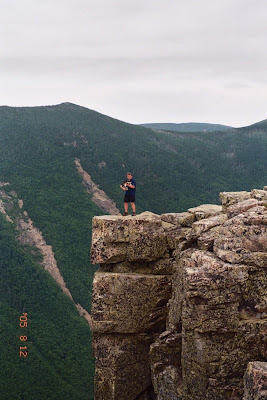 (The photos are of two of the Bonds. The top photo is on the summit of West Bond. The second photo is on Bondcliff.)
I have decided to attempt a Bonds Traverse tomorrow. The Bonds Traverse is one of those longer hikes known as “death marches” by some who write about these mountains.

In the summer this hike leaves the Zealand trailhead up north and bisects the Pemigewasset Wilderness ending in Lincoln Woods on the Kancamagus Highway just east of Lincoln. It is 18.5 miles. In the winter, however, Zealand Road is closed to traffic so this becomes a 23.5 mile hike. (For those of you who don’t know the trails, the starting point is not too far away from Bretton Woods.)

We’ll be making an additional stop along the way, heading up Hale Brook Trail to Mt. Hale, then taking the Lend-a-Hand Trail to Zealand Hut. There I will refill water and double check the higher summits forecast before heading up Zealand, over Guyot (not considered a 4,000-footer) and onto West Bond, Bond and then finally Bondcliff. From Bondcliff we are home-free; but this is this is where the true death march comes in. It’s a relatively downhill and then flat walk in the woods for a little more than nine miles.

The Bonds Traverse is one of our most challenging hikes and we’ve waited for this particular day to do it as the weather looks storm free with bright sunshine, light winds and weather between the teens and mid-twenties.

It will just be Atticus and me tomorrow. Although we will have some help by the way of Ed Hawkins and his group of hikers. They will also be doing the traverse but will be parking some of their cars at the Zealand lot tomorrow before driving back down to Lincoln Woods and starting at about 6:30 in the morning and coming the other way. I’ll meet Ed and his group at 5:30 in the morning where I will give him my keys and car to Ed to drive down to Lincoln Woods where it will be waiting for me and the Little Bug.

Yesterday I did not feel well and I decided not to push it because of the prospect of the Bonds Traverse on Saturday. Instead I slept in, took flu medicine, then drove down to Concord to visit our friends at the EMS where I picked up a few needed supplies. When we returned to Lincoln we just hung out for a little while before getting to bed early, again with plenty of flu medicine in my system. When I awoke this morning I checked tomorrow’s forecast and then contacted Ed Hawkins and made arrangements.

Just how long this hike will take I cannot say. Last year it took Tom Jones, Atticus and me about 15 hours (without adding in Hale), but after getting above the hut we were caught in a snowstorm that left us out there in the middle of the Pemi Wilderness with hip and waist deep drifts of snow and the wind blinded us and made for slow going. It was by far the most difficult hike I had ever done. Later in the winter, on a perfect day with the trails well broken out, it was just Atticus and myself and we added in Hale and another two miles (long story) and it took us somewhere between 10-11 hours.

Tomorrow’s higher summits forecast from the Mount Washington Observatory is:

In the clear under mostly clear skies. Wind chills 35 below early, improving to 15 below.
Highs: Rising to mid single digits°F
Wind: NW at 30-45 mph, decreasing to 15-30 mph

Washington’s summit is about 1,500 feet higher than the summit of Mt. Bond, the highest peak we’ll be on tomorrow. Therefore the temperatures will be more comfortable than that and the winds will be a little less than what is being predicted.
Once on the Bonds there are no bail out options other than heading back to Zealand Hut, but the hut doesn’t allow dogs. This is one of the reasons I have to be careful about which day to hike this. Once we are out “there” there is no escape.

As far as trail-breaking goes, I’m told Hale Brook Trail is broken out up to Mt. Hale and that the Lend-a-Hand Trail is also broken out to the hut. From the hut up to Zeacliff it is well broken out but not as well broken out to Zealand itself. Then from Zealand across the Bonds will not be broken out most likely. However, we will encounter Ed Hawkins’ group somewhere along the Bonds coming from the other direction and there is a chance that there may be some others staying at the hut over the weekend who will also be trying to get to the Bonds so this could help us by making the trails even smoother.

I think we will take one more day of rest today to get ready for Hale, Zealand and the Bonds. Wish us well. (Of course, as always, this is all subject to change.)
at Friday, January 25, 2008