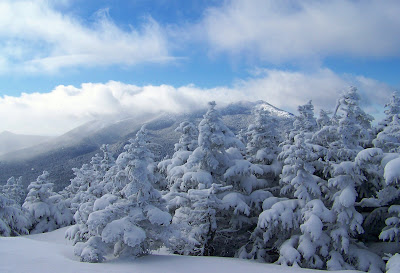 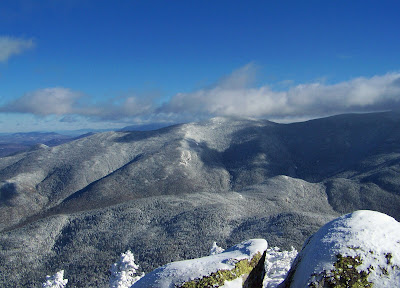 Yes, I know I changed my mind. No Tom, Field & Willey today. Blame it on the Patriots.

Atticus and I left the apartment a wee bit later than I had hoped and on the way to T, F & W, I passed the Garfield parking lot. It's so much closer than T, F & W and with our semi-late start I decided to go with the 12.4 mile hike to one summit instead of the 10 mile hike to three summits.
We started the hike at 7:30 and were done six hours later. I'm no speed demon and never will be but this was a good, fast hike for us today and a good sign that my leg is coming along nicely.
I have to tell you, this was one cold day! It was the first time I hiked this winter with two layers on for all of the hike and three on for at least half of it. Also the first time I wore gloves and hat the entire hike. I cannot tell you the temperature we experienced on this one but another hike reported that it was minus 7 degrees on the top of Pierce with + 15 mile winds.
Someone had hiked this trail yesterday but due to last night's snow there was anywhere between two to eight inches on the trail. The higher we went the deeper it was. However, the higher we went the bluer the skies became, too. In the beginning we walked through a dreary early morning gray and snow flurries. Up high the sky was incredible, as were the snowy trees.
As it turned out we were off the trail 90 minutes before kick-off. Go Pats!
at Sunday, January 20, 2008