Newburyport Current Has A Small Piece In This Friday's Issue 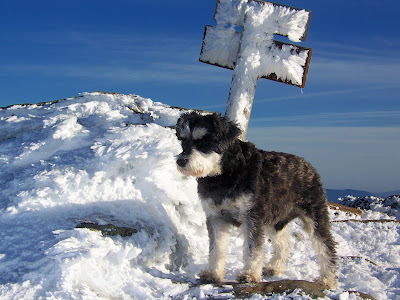 Newburyport - Perhaps the most controversial figure in Newburyport since Bossy Gillis, former Undertoad editor Tom Ryan, packed up his hiking gear and last fall moved to the mountains of New Hampshire.
Ryan is now writing for the Northcountry News about his Winter Quest to raise money for Boston’s Angell Animal Medical Center. Or, rather, their quest — like the Patriots speak as a team, Ryan’s little pup, Atticus Finch, gets equal credit. The two are attempting to hike each of the 48 New Hampshire 4,000-foot mountains twice this winter. That’s 96 peaks in 90 days. An improbable goal, Ryan notes, but not impossible.
The former editor is hoping people will donate $50 to dedicate each peak to a pet, past or present, make a pledge to him and Atticus, or help out in any way they can.
As of this writing, they were eight up and, as Ryan writes on his blog spot, he met his demon witch in the dark atop Mt. Willey and faced her down.
“Such release. Such peace. Is it any wonder that those who are thought to be prophets throughout the history of religion found their peace wandering the desert, climbing mountains or out at sea? It’s the natural world that heals the soul. If church were like this, I might actually go from time to time,” Ryan says.
“I admire what he does — taking something he enjoys and making it a fundraiser for someone else,” says Bil Silliker, who donated 10 percent of the proceeds from the Dec. 22 sales at Licorice & Sloe to the cause. “I love hearing about it – I love my little part of it.”
The Saturday before Christmas is traditionally the busiest day of the year at the teahouse and, in 2007, the Saturday before Christmas was also the first day of winter and the first day Ryan and Atticus could hike.
“It made sense to use that day as our fundraiser,” Silliker says. After reading a recent blog entry by Ryan, he says he locked the door and went into the bathroom to wipe the tears from his eyes. Later, wife Meg (who is the actual owner of the business) confessed that she had also cried when she read about Maxwell Garrison Gillis, Ryan’s pet previous to Atticus.
“The two of us were big cry babies,” he laughs.
Silliker, who manages the teashop, is also supplying Ryan with tea to shore him up on his hikes.
As for leaving Newburyport, Ryan says, “It’s a lot like having a very intense relationship with a lover, and when it ends, you just know it’s supposed to end. Then when you return to see her down the road, you realize that you shared something special when you were together, something that may never be replicated, but at the same time she now is with someone else. It’s both awkward and nostalgic, but you can’t get too nostalgic because it does no good.”
Anyone wishing to donate to the cause (all the proceeds go to MSPCA-Angell) can still do so at Licorice & Sloe or by sending a check made out to Angell Animal Medical Center to: Tom & Atticus, PO Box 111, North Woodstock, NH 03262.
More information and a chronicle of their climbs are at tomandatticus.blogspot.com.
at Friday, January 04, 2008