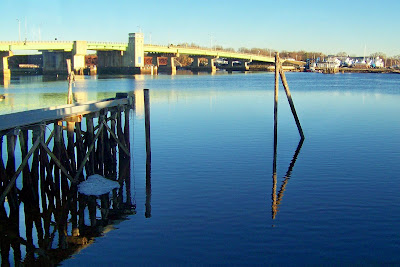 (The Merrimack River from inside Plum Island Coffee Roasters.)
Good morning from Newburyport.

As soon as I finish typing this we’re off; first to Abraham’s Bagels and then up to Lincoln. A quick stop at my apartment, then it’s off to the Kinsmans, two days delayed.

First thing I noticed this morning was how chilly I was when I woke up. Nice. That’s a good sign for the trails up north. Hopefully they will not be mashed potatoes again. And the temperature looks promisingly chilly over the next several days. We need it.

The Newburyport trip has been fruitful. The chiropractor’s appointment with Tom McFadden and massage therapist Sarah George went well. Tom found my right hip out of place and felt this was a major cause for my right knee pain. The I-T Band, which runs from the ileum (hip) to the tibia (big shin bone) is the culprit. They worked on it for me, gave me some exercises and stretches to make it work for me. This alone made the trip worth it as Dr. Tom is one of the best I have ever encountered.

The rest of the trip was pleasure, meeting with a succession of friends at Plum Island Coffee Roasters yesterday morning, including Joyce Coady, who owns the joint with her daughter Samantha Stephen. Chatted with Peter & Julie McClelland. Peter is a former writer in my journal. He was our lone Republican. Also met with Terry Carter. So sorry to hear his sister had just passed after a battle with ovarian cancer that has lasted for years.

From there it was off to meet with Ed Metcalf, one of my 80-something friends. A widower with a heart of gold, Ed is someone I worry about. But that’s not why I get together with him whenever I’m here. I do it because he is a good friend. I used to get together with he and Doug Cray (God, how I miss Douglas, who died last year), and John Battis weekly for as long as I can remember. They taught me much about Newburyport politics and even more about friendship.

Ed and I had a simple lunch at Abraham’s where it was funny to be approached by so many I didn’t know, “Aren’t you supposed to be climbing mountains?”

After lunch I picked up Atticus from the groomers, took him for a walk in Moseley Pines, then went to the Inn Street Barber Shop where it was my turn to get a hair cut while Atti looked on and ate dog biscuits given to him by the owner, Esther Sayer.

We then visited with Dawn Price at the Natural Dog. Dawn and Jeff are sponsoring Atticus’s nutritional needs this winter and she loaded us up with hundreds of dollars worth of food and treats, all healthy stuff. It’s always a pleasure to spend time with Dawn and Jeff, although Jeff wasn’t there yesterday.

Then it was off to Dr. Tom’s for a lengthy visit and a drop in on Paul Abruzzi at Jabberwocky, one fine, independent bookstore. Paul is one of the people who headed up the Friends of Atticus and helped raise thousands for his medical bills.

For dinner I met Tom Jones, a sometimes hiking partner, full-time friend and city councilor at a local restaurant. His lovely wife Terry, the other head of the Friends of Atticus, joined us later. It was good to see some of the other folks there, too. As the night wore on Atticus soon joined us inside where he dined and snacked on many of the things Dawn Price had given him.

A full day, and not too hectic. I still can’t decide whether it is good or not to be known, or at least known of, by so many people. My years as editor of The Undertoad were intense and the move north has granted me the ability to decompose from that intensity. Each week away from Newburyport I feel like another layer of the skin of the onion is being peeled away. It’s nice to have friends and warm acquaintances, yet it’s also nice to have the relative anonymity of Lincoln, New Hampshire.

It helped my visit not to try to cram too many visits with too many people in as I did just before winter started. It also helped not to talk too much about local politics. This was a good visit where we got what we needed and are now ready to head back north.

But still, there is that sentimental part of me that can’t help but ache just a bit when leaving Newburyport. I no longer belong here. New adventures call. But, oh, how rich the adventures of the dozen years I lived here have been. They were, as I previously wrote, intense. I was blessed to be able to help shape the political landscape, shed light on some things that had been in the dark for decades, and create positive change. I’ve said it before; Newburyport to me is like that old lover, the one you went through so much with. Some good times, some bad, but all were memorable and as much as I shaped Newburyport, it shaped me even more. And any place that holds so many friends has to remain special.

When I consider Newburyport, I consider Frodo Baggins in the final movie of the Lord of the Rings trilogy. In the end Frodo leaves the Shire, he’d seen too much. As he told his dear Sam, “We set out to save the Shire…but not for me.” I don’t know if I can say that much, but for years The Undertoad was an agent for change and Newburyport, I would like to think, is better off for having had it….but not for me. Like all great stories, the end is sometimes painful, a heavy heart in leaving, but a light heart in approaching the next chapter.

I am forever doomed to wear my sentimentality on my sleeve. I am forever blessed to have been touched by this very different place where the Merrimack and the Atlantic meet just as I am blessed to be living in the White Mountains these days. They share something in common, at least in the influence they have had on my life. It’s summed up by something Robert Frost (another White Mountain hiker) wrote: “permanence in poetry, as in love, is perceived instantly. It hasn’t to await the test of time. The proof of a poem is not that we have never forgotten it, but we knew at sight we never could forget it.”

I consider myself lucky to have been touched by both.

And now this two well groomed males, one big, one small, head back north to the mountains.
at Thursday, January 10, 2008