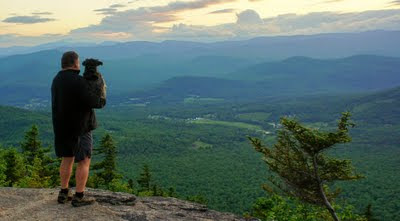 Sitting here at my desk, Mozart washes over me. The moon has replaced the sun, cool night has traded places with the heat of the day, and a candle flickers where a soft breeze invites herself into our little home. Atticus is sleeping close by and his nose points to the open window as if welcoming that gentle stirring. He’s sleeping as he always does, as if he doesn’t have a care in the world. I envy him that. I sleep well; I just can’t remember ever being wrapped in so much innocence.

I think if anyone saw him like this they wouldn’t know the first thing about him. It’s like when people see him sitting up in the cradle of my arm. He looks like a stuffed animal and they get the impression he’s spoiled. Little do they know the miles he’s walked or the mountains he’s scaled, the ice, wind, snow, and heat he’s endured. I often forget it myself when looking at him. Especially when I see him like this.

However, I’ve been reminding myself of all those miles and mountains lately because I’ve been worried about him. His right hip has been nagging him for more than a month. He hikes fine. It only bothers him when he gets up off the floor. He takes a few steps while lifting that one limb up and moves along on three legs for a bit. No complaints though, no whimper, or look of sadness in his eyes.

It’s that hip that had us at Angell Animal Medical Center in Boston the other day.

In the week leading up to the appointment, the first of three we had at Angell on Tuesday, (the other two were check-ups for his long existing heart murmur, and his eyes) I watched Atticus carefully as he walked. No sign of a limp. But damn it, whenever he got up off the floor he looked like an old, wounded dog.

I now know that there is a direct connection between his limp and my heart. The more trouble it gives him, the heavier my heart sits in my chest. But as of late I’ve really done my best to think of him on our recent climbs instead: in the early morning through the blazing heat above tree line on Chocorua; in the pre-dawn hours on Jackson under a glowing ghost of a full moon; and an early evening hike up South Doublehead on the Fourth of July weekend.

I've especially been remembering the last one.

From the ledges of South Doublehead we watched the valley below grow dark; clouds sail leisurely along the mountains of Montalban Ridge and the Presidential Range, and the sun sinking inevitably below those shadowy peaks. And when all was dark and all was quiet the first burst could be seen below our feet. Then came a second. Fireworks exploding. One at a time; then several in a row. Varying colors and sizes. How wonderful to look at them as if they were flowers there one moment and gone the next? The sound of them followed the sight of them and then lived a little longer as they echoed through the valley and the nooks and crannies of these ancient mountains.

When the grand finale came, the sky below – how often do you get to say that? – was afire and we both watched, his head next to mine as we stood on the edge of a cliff and I held him in my arm. I saw the colors reflected in his eyes, star bursts coming and going; and I saw the intensity in the sense of wonder in his gaze. And then I felt it within me.

His innocence always leads me back to myself.

After the show ended and smoke hung lazily below us but above the valley floor, I changed my mind and instead of heading home we climbed North Doublehead, too. The forest between both peaks is rich and teeming with life and we came upon a porcupine and stopped about ten feet away.

“Gentle,” I whispered and crouched down. Atticus sat next to me and under the blaze of a headlamp so bright it made night feel like day, we watched that porcupine as he turned his back to us and showed us his quills. Strangely though, after a bit he looked over his shoulder, dropped his armor, and turned to watch us. After a minute or two waddled off the trail, leaving the two of us looking at each other, and there was that sense of wonder again, that innocence.

We reached the top of North Doublehead at 11:00 and no one was in the cabin so we took the short path through the trees behind it and stood on the natural stone steps looking off the eastern side of the mountain into Maine. I turned off my headlamp and we sat together watching the stars above and the distant lights of civilization twinkling below.

Such things I will never forget.

I was thinking about Chocorua, Jackson, and especially the Doubleheads while we sat in the antiseptic waiting room at Angell on Tuesday. Atticus upright on the wooden bench next to me; (sans leash) watching almost curiously as numerous other dogs were led by on leashes and cats were carried around in carriers.

That’s the secret we who climb and love mountains hold dear – you never climb a mountain just once. It’s with you forever and always waiting for when you need it most. And when you fear that maybe your mountains are numbered and there could be an end to it all, you hold them all the more dear.

When the doctor came for us I told him about Atticus’s hip. He asked questions, felt around, tested his range of motion, and shrugged. Seemed fine to him. Then he took x-rays. Nothing to see there either. He double-checked with the radiologist. Still nothing.

My worst fear was arthritis, maybe a hip replacement, perhaps an end to his summit sitting. But all that was said was “Just take it slow for a bit. Otherwise he’s fine.” (And since then, he has been.)

Three hours later we were with Atticus’s ophthalmologist. He had been considering doing some minor cryosurgery on some irritating lashes. But wouldn’t you know it, they were gone. All but one. No surgery needed.

And the last appointment, I approached that one with a bit of caution for he is getting older, was with his cardiologist. Major tests were done and yet his heart murmur hasn’t grown more than a whisper of a breath in four years.

I had gone to Angell aware for the worst, worried about innocence that could be lost, and Atticus being separated from his mountains and in a strange and wondrous twist, things couldn’t have turned out any better. And so it seems we have more mountains to climb, more wonders to share, and more memories to make together.

Life is fleeting and I’m happy to say we’ve never wasted much of it. As a matter of fact, that afternoon, in the three hours between Atticus’s first appointment and his next two, we drove out to Medway and made yet another memory. I hadn’t been there since 2009 for there’s been no reason to go. But I felt like we finally had that reason. Medway's the little town I grew up in, the place where my parents are buried.

When you read our book you will see that I don’t remember much about my mother. She died when I was young. But my father…he’s one of the few characters in the story - and what a character he was! He would be secretly thrilled that Kirkus Reviews wrote that he is, “…a haunting presence throughout the memoir.”

During the hour we had before heading back to Angell, Atticus and I sat on the grass, the little dog under the shade of a graveside shrub, and Jack Ryan’s youngest son leaning against the headstone. I said a few prayers and then I started reading out loud. I read Following Atticus to my father just as he used to read to me. I read and read. I read every bit he’s in and then some.

I’d like to think he would have loved it.

Mountains are there when you need them, but not all the mountaintops are in New Hampshire. Some can be found in an animal hospital where nothing is found wrong, while others – well, they exist wherever father and son connect. They are the touchstones to what matter in life. 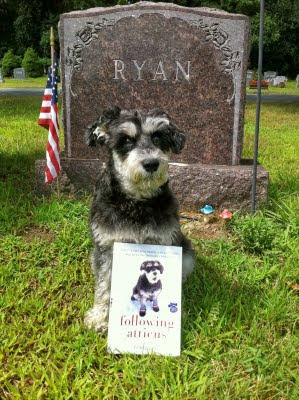 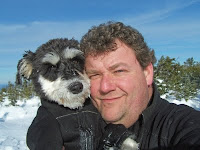 Following Atticus will be published on September 20, 2011 and we'll be kicking off our tour in North Conway at White Birch Books. Then we'll be hitting the road. Come on out and meet both of us and get a signed copy of our book.

Check back often for updates. 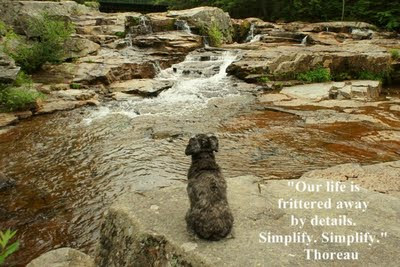