The Lessons of Miss November 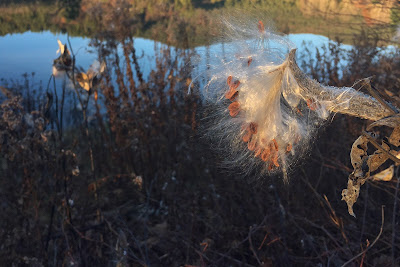 It helps not to have a television, or to visit big box stores or the outlet chains. Without those, a natural rhythm unfolds. The world slows down. I can feel it exhale and inhale. Holidays remain holidays, celebratory resting points throughout the course of a year, and not something highlighted in a mailed circular or a trite phrase in a Hallmark Card. Here in the mountains, where nature infuses our lungs with kiss after soft kiss of her ever-changing breath, the bare essentials thrive without distraction.

Thanksgiving is upon us. The focus used to be on an abundant turkey dinner that pulled a flotilla of pies behind it, and bookshelves decorated by the wax fruit of my family’s cornucopia, and the decorative pilgrim and turkey candles (that were never lit). These years, however, for me it’s about how the forest has slipped out of her clothes and stands naked. Those of us who truly love her, love her most now - without the make-up, the coiffed hair, smoky eye shadow, painted lips, or fancy clothes. Miss November has arrived unabashedly and lives out loud. Her verse is as simple as "take me as I am."

This morning, Samwise, who has grown over the past six months into the body he will have for at least a dozen years to come, trotted ahead of me on the trail. Where the path turned along the river’s edge, he stopped and sat down, his head tilted to the side, his ears focusing like radar dishes. There are moments I see a calm in is eyes,  that belies his youth, but it is often overtaken by the wonder of things he’s meeting for the first time. He is a most curious fellow.

What caught his attention this morning was a hum, and a soft vibrancy, the symphony of the leaves of the young beech trees that have decided to winter in the mountains. While most of the forest is somewhere between silver and gray, the beech leaves have just turned bronze. They are beginning to dry, and curl at the edges. Eventually the sun will bleach them and they’ll become ghosts in the sylvan landscape until they fall in the spring.

What Samwise heard was the tapping of hundreds of invisible feet - dance steps. This is a trait of the mysterious beech. The forest air can seem as still as January ice, but a single beech leaf can catch a melody, a whisper, and start fluttering. A couple of months from now, when the wind barrels through the forest and the leaves are drier, they rattle with a frequency that calls you closer.

This morning, hundreds of beech leaves were quivering and Samwise heard them. He moved closer, sat down again, and touched his nose to one of them. It so surprised him that he looked up at me.

Old Celtic legend has it that when you see a cyclone of leaves spinning up from the ground that the little people are at play, or war. This is the time of year when I channel the poet William Butler Yeats. I fancied that the way the leaves were moving this morning was a sign that the wee folk were trying to get our attention.

They had certainly captured Samwise’s.

What he didn’t notice was the red squirrel sitting on a branch five feet above his head watching him. I smiled when he looked in my direction, and sat down next to Samwise, whose fascination  with the vibrating leaves continued, and even though it was cold we stayed for the show.

When we eventually moved on, another turn in the trail brought us to a construction site. We  looked up at a massive pileated woodpecker who was drilling in an old maple. Rat-a-rat-a-whap! His head both manic and controlled. His industriousness in digging for his food was almost violent. I watched Samise's move his head slightly back and forth, back and forth, as if under the bird's spell.

Call me a fool (although I feel anything but foolish) because I greet these trees and these souls in the forest, and I’ve urged Samwise to sit and study them instead of giving chase. My homily to him is a common theme: “This is their home, and we are visitors. Please be gentle.”

He is responding well. He'll sit for an hour watching the beavers, the lone slippery otter in the nearby pond, and the heron which turns from statue-still to a pterodactyl in flight. He studies things differently than Atticus used to. There is more of a spring in his gaze, a clever joy, whereas Atti was the essence of Zen. Atticus was so still, both in body and soul, that wild things approached him. Samwise has learned to be polite. He’s respectful, but cannot imagine anything wild, be it flora or fauna who does not want to get to know him.

I reassure him that in being still, he’ll become approachable, and life won’t flutter away like an excited butterfly. It is a joy watching him take to these lessons while he gets to know Miss November in her undeniable grace. There’s nothing about her that is not right in front of us. She is the natural world’s antidote for all things Kardashian, vain, and vapid. November has a depth that mesmerizes. It is the reality we need in a world taken over by the fiction and drama of reality television. What you see is what you get, which is always more than enough in the natural world.

Meanwhile, the unnatural world careens at us like Christmas decorations that appear before Halloween, and chaos and anger spout and vent themselves in politics. While our nation gives birth to a new and strange era, where violence of thought, word, and deed are not only acceptable, they are now also rewarded, I find myself needing these lessons I’m sharing with Samwise just as much as he does.

I am aware that the only way I can approach the sharp edges is by softening my own. I cannot change what comes at me, only my response to it.

Each month, a new teacher steps forward. Each season brings new lessons. We stretch and we grow. Soon, with each year, the friendship of two souls will be set in something more lasting than stone, something everlasting.

For now, though, I’ll let November take us by hand and by paw to lead us to an enchantment that has been choked in the civilized world.
at Thursday, November 10, 2016 15 comments: