Atticus and the Cold

We are fortunate that we have a very active social media following, especially on our Following Atticus Facebook page. It’s humbling to see so many become invested in our story. I’m a huge fan of genuine interaction and I’m often inspired by some of the stories people post about their own journeys. It’s incredible how much I’ve learned about some lives and it is an honor to have things that matter shared with me.

Of course, my favorites are those who have read our book and know much of our story. They have a better understanding about us, as you might imagine. They realize more about the relationship I share with Atticus and what we have experienced throughout each of the four seasons on the mountain trails.

Each year about this time, and I noticed it this weekend when a scant sprinkling of confectioner’s snow dusted our backyard, some worry about Atticus being cold. Some even get angry about it.

Again, reading the book helps, because much of it has to do with our winter hiking.

I remember the first day Atticus arrived in my life. He was eight weeks old and after we returned home from the airport we headed straight out to Plum Island to spread some of Maxwell Garrison Gillis’s ashes. It was mid-May and unseasonably cold. A wind rode the waves onto shore and brooding clouds settled overhead spitting snow down on us. At only five pounds, and from the south, Atticus wasn’t ready for the cold and he shivered in my arms. I quickly tucked him in my coat and all he was instantly cozy.

We started hiking when he was about two and a half years old. By the time he was three and a half we entered into the world of winter hiking, hitting forty-one of New Hampshire’s forty-eight four thousand foot peaks our first winter. He weighed twenty-one pounds then. In each of the next three seasons we hiked each of the forty-eight again and when winter returned, we set out to do two rounds of the forty-eight for the season. Ninety-six peaks in ninety days. It was a crazy way to raise money for the Jimmy Fund and Dana-Farber Cancer Institute in the name of our friend Vicki Pearson, who was taken from us by cancer.

By the time our second winter in the White Mountains came to a close, Atticus weighed in at twenty-seven pounds. Even with all that exercise he’d gained weight.

I switched him over to a raw diet and he quickly lost three pounds before leveling out. Then, inexplicably, he gained it right back even while continuing to eat healthy, and hiking at a frenetic pace.

The only way to explain it was that after two years in the winter Whites, Atticus’s body knew what it needed and it insulated itself.  It was evolution of a body right before our very eyes.

Now let me be the first to say that I’m not an expert when it comes to dogs. Nor am I a scientist or a nutritionist. I can only speak to what I know. Mostly, we go about everything in our lives with common sense. If something seems right, we do it. If it doesn’t, we don’t. If something goes wrong or isn’t working, we change directions.

So when it comes to the cold it’s as simple as this: Atticus has become a winter dog. He’s far more comfortable November through April than he is from June through August. He abhors the heat.

Two years ago, when Atticus went through chemotherapy, his weight hit thirty-two pounds. Now he’s back to twenty-seven, and while he has a body suit and numerous sets of Muttluk boots, he rarely needs them. But when he does, I put them on him.

I can assure those of you who worry about him getting cold, when the temperature drops or it is snowing, he’s most likely not like most of the dogs you’ve met. He thrives in cold temperatures.  Whereas Will was just the opposite toward the end of his life. He wore his fleece-line coat if the temperature dipped below sixty degrees. It just goes to prove what we already know, we are all different.

And here’s when the common sense part comes in. When Atticus is cold, he lets me know, and I have him in his fleece-lined body suit and boots within seconds.

So when you see Atticus in the months to come wearing only his birthday suit, please understand he’s not you.

If there is something I’m proudest of with Atticus. He always has a choice. His opinions are taken into account. If you’ll remember from the book, he’s pulled the plug on a handful of hikes he didn’t feel up to and that was more than okay, it was respected.  His comfort is always important to me, as is the comfort of all friends.

This reminds me of a story from about seven years ago. It was toward the end of winter and a television magazine show wanted to feature the two of us. The time we set up to meet, Atticus and I were coming off a hike and the television crew would be waiting for us at the trailhead. While setting it up in advance, the host of the show, a very attractive woman, suggested that it would be best if Atticus had his body suit and boots on when we came off the trail because it would get more people's attention on television. I told her that would be fine if it was cold, but if it was a bit warm (relatively speaking for the season), he wouldn't be wearing them. She pushed the point and kept talking about how it would look great on tv. I told her that didn't matter to me. What did was Atti's comfort, and if it was above a certain temperature he would roast in his suit and boots. That didn't matter to her.

"Come on, Tom, it will be great television!"

"If you want great television, how about meeting us at the trailhead while wearing nothing but lingerie and four-once heels?"

For some odd reason, I never heard back from her and the show was never filmed.

This winter, as Atticus moves through his fourteenth year, he’ll let me know when he’s cold.

Thank you for understanding and appreciating the differences in all of us. 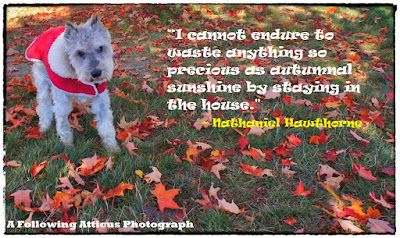 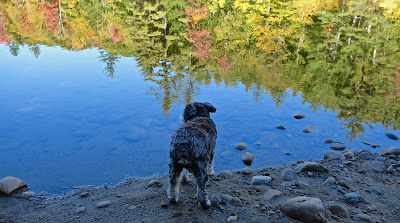 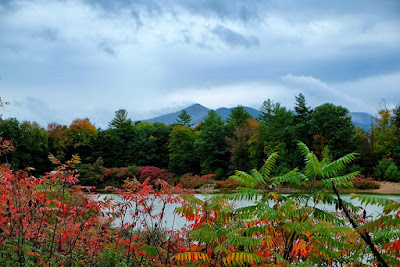