Today, in subzero temperatures, I was drawn back to ten years ago. It was the year when Atticus and I set out to summit each of the 48 4,000-foot-peaks in the White Mountains twice in a single calendar winter. It had been accomplished before, but only once. The storied Cath Goodwin, longtime White Mountain legend had succeeded. But that was it. As far anyone knows, no one else had even attempted it.

What made me think little Atticus and I could accomplish such a feat?

Truthfully, I had no idea whether we could or not. The previous winter, we fell short of my goal of hiking each of the 48 in winter. At the time, I believe only 14 known people had ever accomplished a single round in winter. We fell short by two hikes.

But there we were on the night of the winter solstice entering the unknown and preparing to push beyond what either one of us had ever been.

It’s almost comical when I look back at it now. I was fighting Lyme disease, weighing 260 lbs., obviously not in shape, and Atticus weighed only about 25 lbs. He was not your typical winter hiking dog.

Recently, while driving across the Kancamagus highway, I took note of the new snow piled up along the side of the road, the various trailheads Atticus and I parked at that winter a decade ago, and at my young passengers in the car. There was little Emily, with me for only a month and aged seven months, and Samwise, aged two years.

The juxtaposition of fragrant memories; my current life where heart, kidney, and other ailments keep me from hiking up; and the company of young Samwise and Emily washed over me. Suddenly, I could not see, and I had to pull into the parking lot of the Oliverian Brook trailhead. As I let Samwise and Emily scamper out into the snow and the first yards of the trail, I could have sworn I’d seen a little black and white dog there with me again.

In December of 2007, when we’d only been hiking for a year and a half, there was hardly a trek we started in winter when I was not draped in fear. It didn’t help that many of those longer hikes over several peaks at a time began in the bone-chilling pre-dawn hours. We often ended our longer hikes after the sun went down as well.

It gnawed at me. The cold and darkness were forbidding. I felt isolated and alone. The idea of hiking 14 or 18 or 27 miles through deep snow and across the dangerous ice, through winds biting and cruel, far away from anyone else, rattled me.  So why did we do it?   Robert Frost wrote in a letter, “A poem…begins as a lump in the throat, a sense of wrong, a homesickness, a lovesickness. It is a reaching-out toward expression; an effort to find fulfillment. A complete poem is one where an emotion finds the thought and the thought finds the words.”

Not a lot made sense that winter. Our audacity was nourished by our friendship, and the idea that we would be safe was connected to the understanding that I would keep Atticus safe. There was a wordless communication between us and a sacred trust. Sure, we’d face uncomfortable situations and endure the unimaginable, but we were in it together.

As for that fear each time I entered the woods? It was indeed a lump in my throat.

For ninety days we pushed ourselves beyond the limits sets for us by others, and those I also put on myself. That winter adventure was itself a poem for us, a dance between souls connected by all that mattered in life.

It’s funny, while Atticus knew his limitations, he never showed the fear I felt. No matter how frigid it became. No matter how unrelenting the wind. Not even in blizzard conditions when we were surprised on a trek across the Pemigewasset Wilderness. Not when we were so tired we could have fallen asleep wherever we sat down and never woken up again in the cold.

There were many nights we were out on the trails alone, the only light coming from the heavens above and the beam from my headlamp. In my unease, I’d ask myself, Why are we doing this? Goodness knows I longed for home and friends and hot tea and a good book so often it ached. And yet we continued.

This all returns to me today because the Japanese version of Following Atticus showed up in my mailbox.

I last held my friend in my arms a year and a half ago as he took his final breaths in a rain so gentle it felt like the surrounding pine trees were weeping. Still, Atticus visits me without warning and I know that winter will be one of the highlights of my life.

It lies at the heart of Following Atticus, and that little dog with the big soul, that little Buddha, is still touching people with his authentic and unfettered life. Our story has now been published here in the U.S., of course, and in Canada, the U.K., Italy, Germany, Hungary, and Japan.

As I type this, it is currently -3 degrees. Samwise is in the bedroom, his head on the pillow where dreams and memories come to me. Emily is under my desk, resting innocently on top of my slipper. It is a comfort to listen to Mozart while the wind rattles the windows of our warm home as I tap-tap-tap on the keyboard.

The other day a person who does not know me, other than through my writing, sent me a Christmas card. She wrote: “I know how much you must miss Atticus?”

When I get comments like this, I understand that my acceptance of death is a bit different than most other folks. Talking about one I loved can bring up emotions that spill out of my heart, but otherwise, I’m okay with death. I made friends with her long ago and find kinship in something attributed to Marcus Aurelius long ago: “Death smiles at us all; all we can do is smile back.”

This week I had some clenching chest pain. It is something I never worried about in the past, but in my new reality, I have to pay attention to it. After it passed, I talked to a friend about it, and she asked if I was afraid.

Of course, I have no desire to die right yet, but when that moment comes, I’ll smile warmly and take her hand as we enter another unknown path for a new adventure.

But until then there is so much to do that I don’t have time to miss Atticus. Life is a verb. Each day I open my eyes. Each day life and lessons come at me. Samwise and Emily keep me on my toes. We live in the now. (Yes, occasionally there are those visits to yesterdays I had cherished, but I wouldn’t wish away what I now have for anything.)

I’m moved by Atticus. Moved by Will and by Max and inspired to continue growing. I cherish what we shared and what we taught each other. But how can I miss Atticus when he is a part of me?  On days like this, when faced with a version of our story that is now being read in a different part of the world, I feel it all the more. 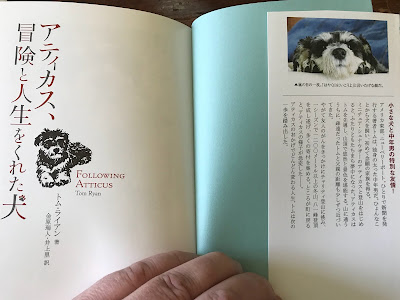