What a Little Moonlight Can Do 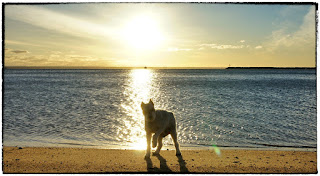 I don’t spend too much time living in my past, so it’s no mystery why I don’t spend much time wondering about what Will’s life was like before he came to us.  I concentrate instead on what his life is now.  But the other night as I was carrying him outside I was struck by the calm black water of the harbor and the way it caught the low flying luminous full moon and scattered its reflection toward us.  There was Will cradled in my arms like a baby, his full heart and equally full belly reaching up toward heaven, his nose tucked under my chin while his little body shivered at the first bite of night air. I felt in my arms a living, breathing soul who is so dependent on us and a thought entered my mind for the first time.

“Sixteen long years ago Will was a puppy…someone’s precious puppy…and his life and theirs was bright with the promise of what could be and was touched by his innocence.”

For some reason this stopped me in my tracks and I thought of what an honor it is to be able to give him this gift, to allow him to feel precious again as he most likely did as a puppy.  As I pulled him close and thought of all this, caught under the magic of the moonlight, a tear rolled down my cheek for Will and the splendor of this moment and my little ancient friend stopped shivering just long enough to lick it with his tongue and look up at me with those cloudy eyes.

So funny, this was a dog who was so angry, betrayed, and confused when he came to us that I had to be careful what I put near his mouth for he was vicious and made me bleed several times.  But nine months later he was comforting me with a kiss as I held him against the cold.  I hesitated before putting him down to go to the bathroom because I wanted to hold onto that moment, not just for what I was thinking but more so how it felt.

There have been many moments where I’ve witnessed Will redefine himself and I’ve noted when we’ve reached milestones together.  But none of it compares to what happened the other night and I realized how far we have come together.

As for how I felt?  It was a mixture of many things. I felt proud of him for choosing to live life when he could have quit. I felt joy in knowing we had given him a home when he needed one most. I felt a twinge of sadness realizing that no matter how much time we have together it will be sad to see him go. I felt gratitude for the bond of love we now share.  So many emotions ran through me but none was more powerful than how honored I felt to know that he completely trusts us now and how we are blessed to see him through to the end of his days.

Last May when I told a friend we were adopting Will she said, “Don’t do it, Tom.  It’s horrible.  There will be nothing but heartache.  He won’t last very long. He’ll soil your floors and there will be costly medical bills and it will all stress out Atticus and it will end in heartache.  It’s a thankless thing and I think you’ll hate it.”

She was right about most of it: the medical bills have been steep at times; he has soiled our floors; and this will surely end in heartache when we have to say goodbye to Will.  But she was wrong about something else.  It’s not thankless.  Not at all.  It’s an incredible gift to share what we do with Will and to receive what he shares with us.

I’m sure when all is said and done and the years pass I’ll remember Will in many ways, but I doubt there will be a more lasting memory than the one we received the other night standing where the water met the land near midnight while the reflection of the full moon reached across the harbor to embrace us with her light.
at Tuesday, January 29, 2013 31 comments: