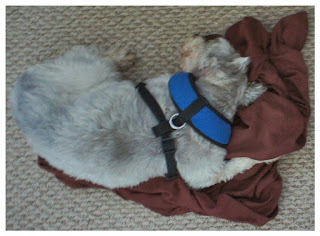 As you can imagine it's not easy for Will to get around right now.

Last night I carried him to his dog bed, which is about five feet away from our bed.  I covered him with a blanket and, on a whim, before going to bed myself I decided to bring him the shirt I hiked in on Friday so he'd have my scent with him.

This is the sight I woke up to.  Little Will had pulled his twisted body from his bed, somehow dragged my shirt with him, and slept on it right next to our bed so he could be closer to us.

It's the simplest, purest acts that touch the human heart and I was moved to see the way he was sleeping.

Physically, nothing has changed.  I carried him outside this morning to go to the bathroom and he went, but I had to hold him up so he could go.  Inside he's tried to stand a few times but has toppled over.  We'll continue to watch him.  It's still early in the game.

God bless your little heart Will. Your actions do speak a 1000 words, showing that you feel the love of your family. Thank you Tom for posting this AM. I really was so eager this AM, after some sleepless thoughts about Will, to receive some update. Having knowledge myself of what your situation is like right now, you have my heartfelt support and continued prayers. My best wishes to all three Ryan Boys; keep those positive thoughts!

This photo brought me to tears. He knows love now, Tom...and he knows that you are holding him not only physically but also in that big heart of yours. My prayers are that whatever happens, you will both have known the love of each other, however brief. Will is in my prayers. You all are.

I am almost done with your book and am so inspired and want to climb again. God bless you all.

Tom Ryan that big heart of yours has showed others how to share love and attitudes towards older unwanted pets. As a geriatric professional, it's difficult observing how our elders are invisible, and on my radar now is how older dogs are put down. You've changed how we think by opening up that big ole heart. You're my hero.

Thank you so much for the update. I, & probably so many others in your online community, hoped you would have a moment to share a few words this morning (I woke up wondering about Will.) You continue to be so generous with us, even at this critical time. I'll add my comment to so many other testimonials to the power of a schnauzer to recover! My Scootie had several very critical events in her life & bounced back from all except the last. Everything happens exactly as it should.......

Thanks for the update. Will continue to pray for Will x

If love, prayers, and tears can make him better, we are sending you have enough of those to make a pup out of him again. Someone once said that the soul is reflected in the eyes. William's eyes have reflected his soul, which is loving and thankful to you. I truly hope and pray that there is more times to share. If not, the a small one of God's creatures will have had a profound effect on your life in a short time, which you can be thankful for.

Thanks for the update, Tom. Bless your heart for taking such good care of Will. It sounds like he's a real trooper & knows who loves him. It is so touching that he wanted to be closer to you last night. You all continue to be in my thoughts & prayers.

Thank you for the update Tom. I'm praying that bit by bit William improves. In the short time that you have had him you have givin him a life time of love and he knows it. You now have 2 very loyal loving dogs. If I could give William full Heath and a longer life I would happily give him one of my own.Xx

If he doesn't get better, at least he knew unconditional love at his end. Hopefully this isn't the end though.

Tom,
You did the right thing!!!

Pets everywhere have learned that Actions have obvious meaning, and 'words' seem be some sort of secret code humans use.

Will's hugging your shirt is a priceless photo and the fact that he brought it with him to be near you is heartwarming. He has found safety and a home.

He may not be feeling well physically, but I'll bet he is soaring emotionally!

My heart swells reading about Will and Atticus. I just stumbled upon your story on FB and I am so moved.
I have a senior dog, Beau, who is 16 yrs old and is starting to struggle as well. These old dogs pull so hard on our heart strings but I wouldn't have it any other way. Hope Will gets up and moving real soon!
-Patti from Charlotte, NC

that is so sweet!
Best wishes Molly

Thanks for sharing Will's touching picture. I lost my silver haired 7 yr old schnauzer two yrs ago. She got sick and was gone 5 days later. The vet still doesnt know what she got sick from or had. But we were with her to the very end♥

Will has had a long life and you are an angel to adopt him. The picture does not need any words but it sure says loud and clear that this lil boy loves his human daddy!

I will keep you all in my prayers♥

Absolutely precious. Actions speak louder than words. He loves you and Atticus.

Thinking of you three throughout the day! Hope all gets a little brighter.

That must of been bittersweet sight to wake up to... I am praying that Will gets better... I finished 'Following Atticus' two weeks ago and I enjoyed it and my husband found your blog and I have been checking regularly.

Hi, I am Cosimo and I am an italian dog, so my english is not THAT perfect!! but I'll try to leave my comment, because it's some time I follow your adventures with Atticus and now that you have also Will I simply wanted to say you that what you both are doing for Will is really very, very beautiful and I am really very touched by it!!

Today is Tuesday and I hope Will is OK. I'm sure he safe and comfortable whatever happens now he's with the 3 of you.

I have my fingers crossed for you that it's vestibular disease. When our family dog, Abby, collapsed one night, we were sure she had a stroke. A trip to the vet, and a reassuring phone call with a friend who's dog had been through the same ordeal, confirmed that it was indeed vestibular disease. She was also really nauseous for the first few days, apparently the sensation would be akin to "sea-sickness". At 60lb, getting her around while she recovered was a challenge, but after a week or so she was walking pretty well on her own, with help up and down stairs. A few weeks after that, you would never know it had happened (most of the time) She lived happily and healthily for another two years after that, though that, combined with her worsening arthritis, meant that she still toppled over on her bum from time to time while playing ball or hiking on uneven terrain.

i have only recently completed your most welcome following atticus. . . and could not look up your blog until now, to fully appreciate first everything you kindly shared in your book. now here we have another heartbreaker, thank you for being able to meet will now too. warm wishes to you all. anne in england at 00.19

just lost my 17 year old best friend, Trip in January. reading a dog/person "love story" once a month to let out a little grief, which would be overwhelming all at once. only 50 pages into your book and feel like i know you in so many ways. now i have met will too. love to all

hi tom! i'm kim from the philippines and i learned about your blog while watching dogs 101 on miniature schnauzer. i wanted to own a mini schnauzer as well, and i was amazed to see you and atticus climbed such great heights! and after going through your blogs, i somehow got to know Will. I hope that Will will get better and i know that he's really grateful to you for loving, caring, and fighting his conditions for him. I know with your big heart, Will will always be secured and loved. Thank you also for showing great love for Will and atticus and for the others you are helping! wish you all the best Tom!

I just finished the book (loved it!) and am a newcomer to the blog, so I had no idea about Will, so now I am reading the next chapter on this site. In the beginning, in the middle, in the end....love is all that matters and the very best gift to give and to receive. Thank you for letting us share in this journey.

Dearest Tom, Will and precious Atticus:

I so enjoy reading your blog and "Following Atticus." I suppose you could say, I am one of your newest fans and I am sharing the stories you write with everyone. I am a writer too, but I am amazed at how easy it is for you to share your thoughts and stories. You have blessed the lives of Will and Atticus. Like you, I have schnauzers that I consider human. My four-legged children talk to me, and say so much with their actions. Isn't it amazing how the love and actions of an animal can say so much! Thank you for sharing your stories. On your FB page, I cannot place comments, so I click share a lot so my fans can discover "Following Atticus." I look forward to reading more about all of you, especially your gratitude. Thank you so much!