Aragorn Comes For A Visit

Our reality is that we live in Bear Country.  I couldn't be any happier about this than I am.

Because we live in Jackson and not far from restaurants and inns, the bears travel frequently around Jackson Village.  On a daily basis some regulars pass through our yard on the way up from the Ellis River headed to the Shannon Door Pub and other places.

We don't feed the bears.  We don't even keep birdfeeders out once winter turns to spring and the first bear paw print is seen.  But they travel through our yard anyways.

One of the locals is Aragorn.  I've named him this although I'm not sure what others call him. He's young and more than a little skittish, but he seems to be fascinated by Atticus.  We first met Aragorn a couple of years ago when Atticus and I were on a walk.  We crisscrossed paths with him a few times and when we returned home and were out in the backyard, he was maybe ten yards away in the vacant yard next to ours.

I reminded Atticus that not all "dogs are friendly" and so he sat.  Strangely, so did the very young Aragorn.  When Atticus dropped to a Sphinx position, amazingly so did Aragorn.  Since that day we've encountered the bear several times.

This year, however, he's become far less skittish with us.  He has always been curious but kept his distance.  And from what I've heard and seen, he's not a big fan of other people around town, but he seems quite taken by Atticus.

Just a couple of weeks ago, Atticus and I were sitting outside when Aragorn came into the yard and sat as Atticus sat, watching the crows, the butterflies, and the chipmunks while we watched them.  He was only fifteen feet away and stayed there for about fifteen minutes. It was only after he heard our neighbor that he commenced to hissing, huffing, and snapping his jaws before rumbling off towards the river out back.

This morning, just after I finished watering some flowers on our little deck, a place Aragorn has taken a nap on while taking advantage of an oversized dog bed out there, I took several photographs of a spider who lives outside our door.  Soon after I was on my hands and knees cleaning the floor right inside the open door.  I felt a nudge from behind and it was Atticus.  When I looked up, just two feet away, young Aragorn was looking at me.

Now, I'm no fool and understand the bears who live us are not our pets nor are they tame.  They are wild animals.  My rule of thumb is to make sure they and we both have exit strategies and that keeps the stress level down.  So this morning, with the door open and me ready to shut if need be, I slowly picked up my camera and took a few pictures of Aragorn.

When it was over and I asked him to leave, he turned to leave.  He always does when I ask him to.

The way I see it is that this was the land of the bears before it was our land.  In the five years we've lived here, we seem to have things worked out pretty well with the chipmunks, woodpeckers, fox, and bear.  I'm not sure if you'd call it mutual respect, but it's clear we've come to some kind of agreement.

Enjoy these photographs of Aragorn, a bear who has seemingly fine manners when it comes to our interactions. 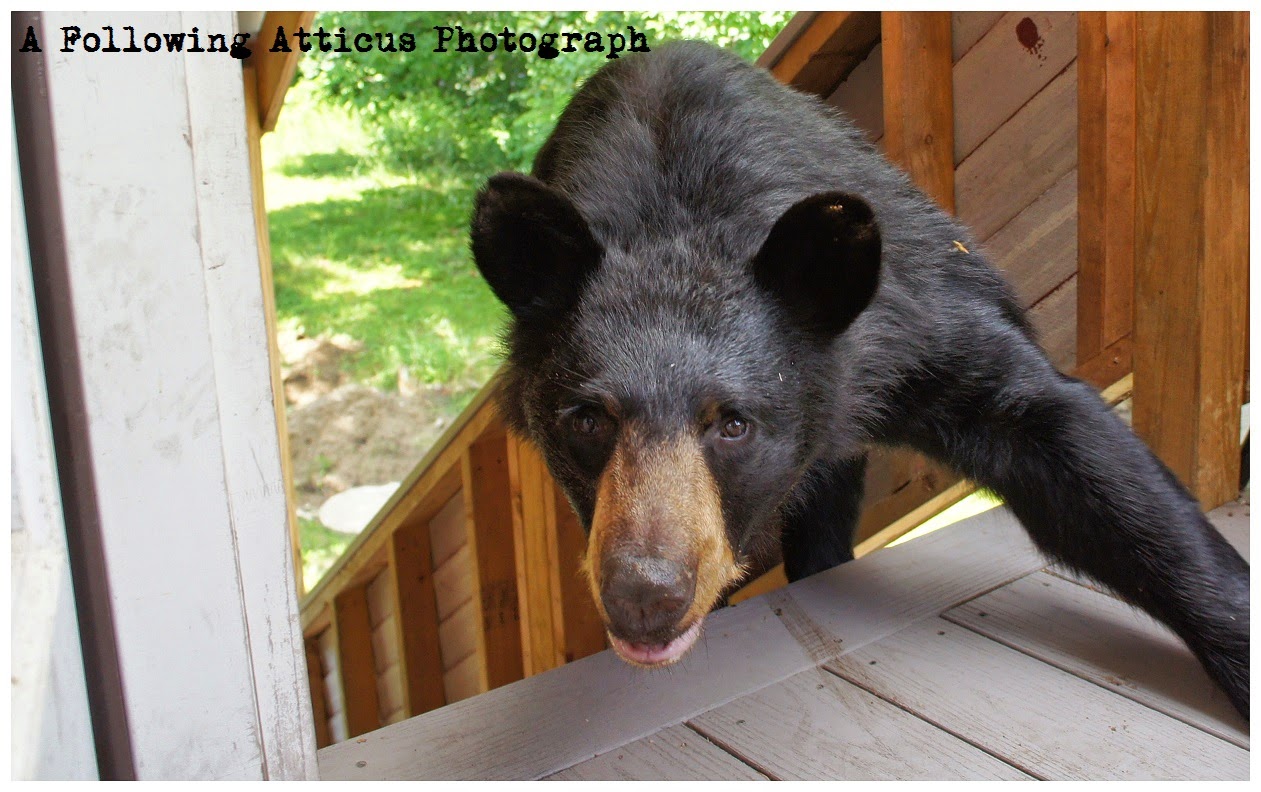 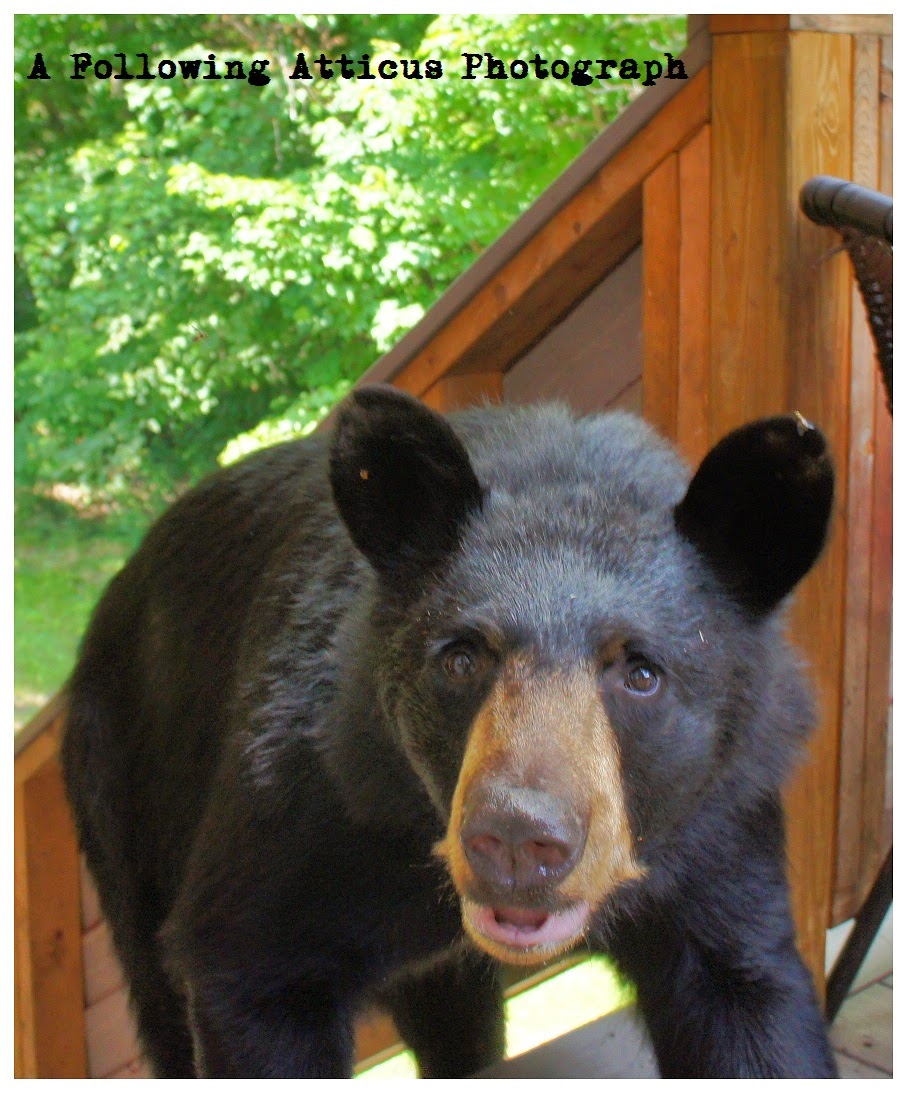 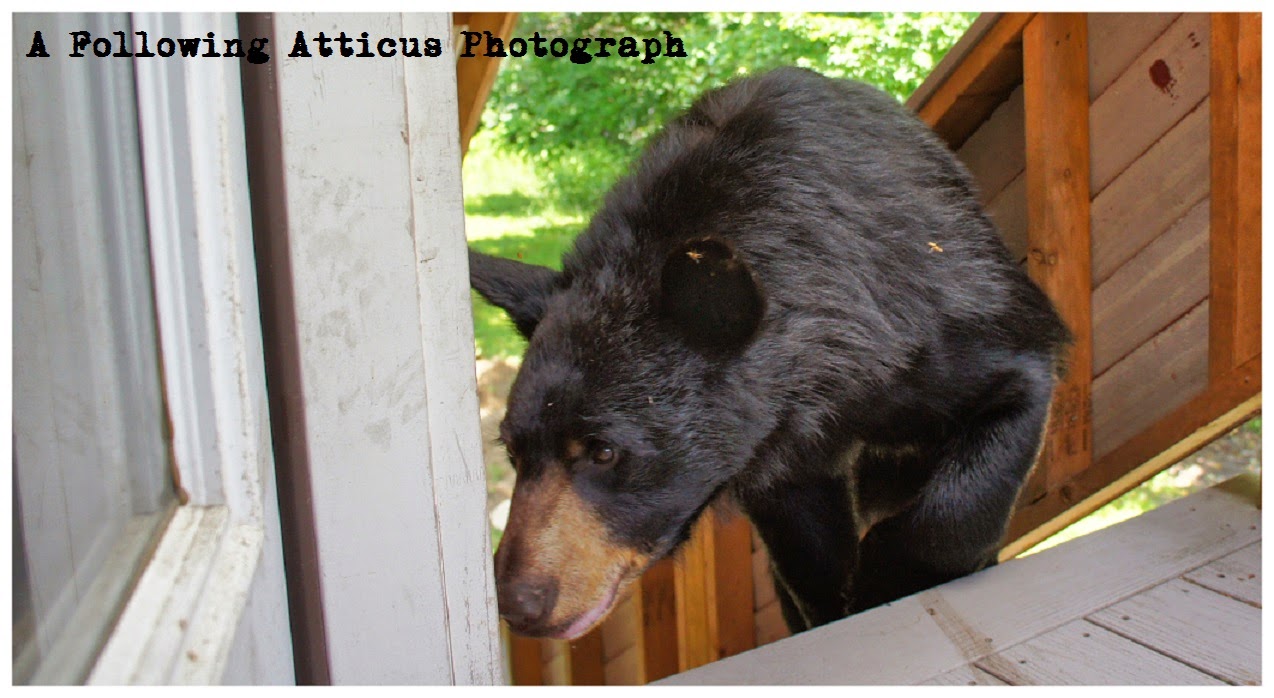 Thanks for posting, Tom! Aragorn is a handsome fella!

Tom, Having lived a long life with and near animals, I believe Nature meant for us to be in partnership with them, and that, given respect and a bit of quiet time, we can communicate with them on a non-verbal level. They seem to recognize those who respect them, and in turn give them their friendship and delight, as your photos show. We have no bears here in the great breadbasket states, so your photos are wondrously special to us. Thank you for sharing.

Amazing pictures Tom! Thanks for sharing!!!

And I would much rather see people shoot photographs of bears and other wild animals than shoot them with guns. What wonderful shots! Glad you had the presence of mind to grab your camera to capture these photos! And thank you or sharing them with us.

I love seeing these photos. I too believe that if we show the wildlife that we are respectful of their presence, they will in turn respect ours. Thank you for sharing.

Your conceptualization of the role of nature, animals and humans is simple, mutual respect. What a great visitor you have in Aragorn, how could anyone not befriend a confident of Gandalf's?

Since I missed this on the infamous "Facebook" I could not wait to see the photographs of Aragorn here, and I must say, they have such a personality! I LOVE bears, and wildlife, but most especially I have a fascination with bears. Perhaps Aragorn believes that Atticus is a cub! Nature and wildlife are so amazing. I always look forward to your stories. You are truly an amazing communicator, not only with people, but with the amazing animals that come across your path. I wish you, Atticus, Sweet Will, and Aragorn the best. Have a splendid week!

What a beautiful post, first one I've read, I shall certainly go back and read more. Thank you.

Wow! Those are amazing photos. Aragorn is a handsome fellow. Thanks for sharing the pics and your kind words

Awesome! Thanks for sharing.

Wonderful photos of Aragorn!! I love how you strive for harmony with nature. Thanks for sharing. Jenn

Thanks Tom I would have missed this otherwise!! Handsome boy!!

What a great looking bear; thanks for taking us with you.

I guess I will follow y'all here instead of Facebook. For some reason, I am not able to comment on there any longer. I look forward to each new post and, at times, am moved to say something. I am a fan of Tom, Atticus, Will, and Aragorn. :)

Just so you know you are not alone in your life with the bears, here is a link to some of Aragon's cousins in Florida. http://pamelasopenwindow.blogspot.com/2012/07/life-is-so-much-better-viewed-from.html I hope you will check this out. We have since removed our bird feeder from the open yard and have it only in an enclosed courtyard, and we take it in at night. I also have a night cam that captures many interesting photos of the bears as they pass through our yard on their journeys. They were here before us. We respect them and they respect us. I love being a part of their world...much like you do! Enjoy!

How wonderful it is to have a visit by such wonderful creatures! I feel so blessed with every encounter I have had with the residents of Mt Washington Valley, may they be bear, moose, fox...etc. Thank you for sharing you visitor with us.

Thank you so much I envy your being close to all of nature.

On Admiralty Island, in southeast Alaska, brown bears outnumber the native population of the village of Angoon by about 3 to 1. The natives say that they and the bears are related, and that is why they have lived together peacefully without violence for thousands of years. Perhaps Aragorn believes he is related to you and Atticus. These are wonderful photos, and Aragorn is a truly handsome young bear.

As always, thanks for sharing Tom! You have a tendency to brighten my days.

Aragorn is quite the handsome young man. I hope the manners and boundaries remain as he grows older.

Shreve Stockton has a similar philosophy with the animals around her homestead. She treats Charlie the coyote, Chloe the dog and the various cows and chickens the same way you treat Atticus and Will; she allows them to be themselves. The Mudflats has a similar relationship with Brian the moose that frequents her yard.

I'll miss Aragorn when you find your farm and relocate. I like bears and he is particularly appealing. I always enjoy when you post photos of him and regale us with tales of the encounter. I have a soft spot for black bears with brown muzzles.

Thank you so much of all of the photos of him.

Hi Tom,
Thank you for sharing... I like the more frequent blog updates. May you, Atticus, Will and all the creatures that visit you have a wonderful summer.

Always wonderful to start the day with a wonderful story about your world. Thank you.

Fantastic pictures Tom! Thanks for posting them for our enjoyment as well - not sure I would remain quite so calm staring into that beautiful bear's face only two feet away! I admire your courage and faith, and I love that he left when you asked him to go! Great story!

Wonderful photos, we don't have them in England so to see one in it's natural habitat marvellous Thank you.

I enjoyed seeing these photos here after reading on FB that you'd had to delete them due to some unpleasant comments from friends of friends. So sad that people can be like that. I hope you've done what you can with security settings to limit that kind of access. It seems to have gotten trickier though to do. I enjoy your writing very much and look forward to reading about the latest adventures of Atticus, Will and you. Thank you.