It was a charming early morning trip, forty miles from Jackson. The temperature was just right. It was even a bit chilly in the shade. The only drawback was the constant buzzing of the aggressive Deer Flies. But swinging my hat helped to keep them off of me. At one point, about a mile into our five-mile hike, I was weighing what was more troublesome - their actual bite, or the nuisance of their furious dive-bombing.

But even these little buggers didn’t take too much enjoyment away from our trek.

At five miles, it was the longest walk I’ve been on since getting out of the hospital in May. It was also the longest hike Samwise has been on. Going forward, we won’t do a hike more than five miles until next summer, when Samwise’s body is more mature and ready for the arduous hikes. But from here on we’ll also start adding elevation gain. I’ve noticed from the little bit I’ve encountered lately, that this is my biggest challenge. The distance of yesterday's hike didn’t wear me out at all, but the elevation we’ll be facing this week surely will.

This place is special to me. For when Atticus and I became less intense in our hiking, we started hiking to places that offered beauty more than accomplishment. I imagine we walked out to Cherry Pond at least twenty times. We’d laze by the water eating together and taking in the scenery. Sometimes we’d sit for hours at a time.

So it made sense that this was the first of many places I will be leaving some of his ashes. A pinch of ashes, and some of his favorite peanut butter crackers. Next week Samwise and I will hike to another of Atti’s favorite places with another pinch of his stardust and some more crackers.

As for Samwise, he’s developing into a fine hiking partner. He keeps his eyes on me, even though he walks ahead. He never gets too far off and if I stop, he also stops, just as Atticus used to do. I was even more pleased that he didn’t leave the trail yesterday though surely tempted by all kinds of squeaks and chattering in the brush. He’d look back at me and I’d say to him, “Please don’t, Samwise.”

Although the water view along Big Cherry Pond is one of the unheralded treats in the mountains, what I find to be most special is the trail leading to Little Cherry Pond. The forest has enchantment in it. Old Man’s Beard dangles from trees. Dead trees lie sprawled across the mossy floor. Tiny saplings spring to life among their decaying ancestors. And the ferns! They are lush and thick and if you have half an imagination, you can almost sense the stirring of wood nymphs and little people as they make their way around the greenery and the mushrooms.

In my opinion, this stretch of woodland ranks as one of the top ten in the White Mountains and it is reason enough to return again and again. 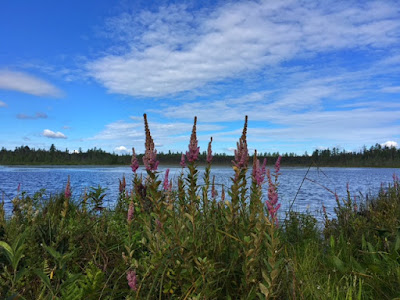 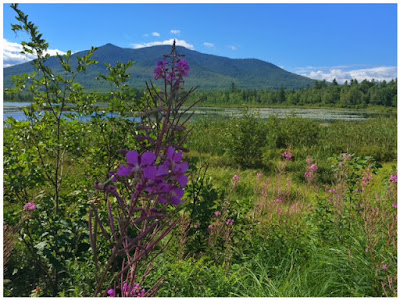 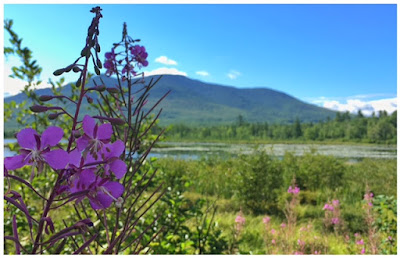 You live in a special place!!!!

Thank you for these. They make a great break at the office. Wish I was there right now!

I am looking forward to more of Atti's favorite places. Thank you for taking us along.

Love the photos! Glad Samwise is doing so well on the walks. :)

Carmen said...
This comment has been removed by a blog administrator.
3:49 PM EDT

It's so neat to be able to see some of the places talked about in the blog and book. I feel like a part of your journey.

Wow so magical and special places. Thank you for sharing this walk and moments you shared with Atticus now Samwise. It is a place heaven on earth

Beautiful photos and love the post. You are surrounded by so much peace and joy. What a wonderful team you have become and Samwise, such a quick learner!
Can sense the gratitude and excitement in Samwise as he treks through the lovely NH Forests.
Thank You,
Peace!

Breathtaking! And Samwise is proving to be such a good friend!!!!

Beautiful and peaceful!! I love how you refer to Atticus's ashes as stardust!! So heartwarming! A pinch of Atti's stardust and peanut butter crackers is a beautiful way to celebrate your dear friend!!!

Unknown said...
This comment has been removed by the author.
4:21 PM EDT

How wonderful to be able to experience this beautiful place through both your and Sameise's eyes!

My heart is full. Thank you for sharing.

Deer flies are terrible here as well. I wear a deer fly patch on the back on my baseball cap that captures them before they have a chance to bite. I don't even know the deer flies are around until I take off my hat and check out the back. Glad you and Samwise are enjoying each other!

Thank you for the great words and wonderful pictures

Reading your posts is the highlight of my day. Thank you for sharing with us.

I do look forward to your adventures with Samwise; he seems to be full of personality. So happy for your both. I hope to be in New Hampshire, Vermont, and Maine in October, so I will look for some of the trails you mention for my dogs and I to enjoy.

I absolutely love the last picture of Samwise, his eyes are full of happiness and contentment.

Thank for your pictures, your words, always lift me. I think of you and reread "Following Atticus" after he passed. I have found a new life through walking through local parks and taking pictures of wildlife, is my greatest healer. As you say "Onwards by all means"

Though I never was as lucky to have met Atticus or Will in person with your beautiful photos and wonderful words you gave me the chance to know them. How wonderful to now take Samwise on your journey in the the name of Atticus. Fabulous!

Beautiful images, and beautiful words...as alway, Tom. It appears that Samwise is becoming a great hiking buddy! Those White Mountains are now on my bucket list....thanks to your book, "Following Atticus", and your photos and blog. Onward, by all means !!

Thank you for the pictures. I love seeing where you live and watching Samwise embrace his new life. Also, tank you for sharing your own personal health progress. I am truly thrilled for you both.

Glad you are doing so well to be hiking longer Tom and with a dear companion! Onwards!

Every time I see Samwise looking so content, at one with Mother Nature, I think back to that pic of him in the "kennel",sadly surrendered to his fate...but as Fate would have it, Samwise had a mission..to be happy and spread happiness, to be loved and to love. Blessed be.

Thank you for sharing your beautiful pictures, Tom. Glad you took Atti along as well. Samwise seems to be the perfect new buddy for you.

Thank you - your words and pictures bring me such peace.....

Thank you for taking us with you and Samwise on your hike. He is growing into the perfect hiking companion for you.

Thank you for sharing your stories with us here on your blog and on Facebook. Samwise is getting tall now. How I love the expressions he shares on his face while tilting his face from side to side. He appears to LOVE looking at the trees, mountains and all of the views, so similar to sweet Atticus. You have blessed his life and his future. Onward Samwise and Tom. I cannot wait to get your next book!

Thanks for the journey of sights & word!

Thank you for this heartwarming Blog. Spreading some of Atticus's ashes and some of his favorite peanut crackers at one of his favorite places...I can't think of a better place for them to be left. I was so glad to hear how well this hike went, knowing it was your first at this length in a very long time. It certainly sounds like Samwise is quite the hiking partner already at his very young age. The photographs are all stunning. I hope someday to walk that trail and look upon all the beautiful splendor of nature at Big Cherry Pond...and I'll think of Atticus and then I'll understand all the photographs taken of him...sitting and taking it all in.

Tom, even though we've never met, and probably never will, know your words and pictures have such an effect on me, and so many others. That's a nice thing in this sometimes disjointed world. You have people out here that care and it says a lot about that heart of yours.
Now there's Samwise, and what a terrific dog.
Right or wrong, It feels, at least in my mind, that Atticus approves, and that somehow or other, there he is, alongside.
Our dogs stay with us forever. I swear they do,

I concur with those who say these blogs and posts are the highlights of our day and feel as if I am hiking with you. I LOVE the picture of Samwise. There is so much understanding in his eyes. I note your consideration of his ability and progressing slowly for him. Many are not so caring . Keep on enjoying these spots as I like many will look to go there one day.

Wonderful photos, Tom, to go along with your narrative and the videos you posted on Facebook. I can see why you are so enamored of this area. Thanks!