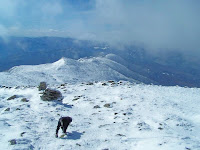 The dreary, sometimes rainy, sometimes showery and all very raw weather of yesterday has decided it likes it here and has settled into stay, not just for today but through Wednesday. However, I really don’t mind. This is a work week and last Saturday’s hike will sustain me for a few days.
More important than any upcoming hikes is the breakthrough in writing. I finally found the route I was looking for and the first chapter of the book is done. I will spend the remainder of this week fine-tuning the book proposal and getting it ready to send to the publishers early next week.
I had done something before but it wasn’t right. It wasn’t me. This time around I just let it fly, figuring if I’m going to succeed or fail I’m going to do it on my own, in my own style of writing. That made all the difference. I have a group of select friends I chose to read, critique and edit the chapter. I chose each of them for a reason. All but one of them have responded to what I sent out and the response is very strong.
In writing that chapter, in finally falling into the trance I wanted to be in to write it, I knew it was good, but like all work needed fine-tuning. When I write I write with my ears. That may sound funny to you, and I’m sure it is strange and not what most writers do, but I write to a rhythm. It’s one of the reasons I write best to classical music or to wordless movie soundtracks. I fall into my writing trance and just go and when it is right it feels almost like I’m composing music. (Although I don’t know how to compose music and have never played an instrument.) But that’s what it feels like. I feel as though when I’m typing on my keyboard my soul is lifted by something greater than myself and my fingers are trying to compose something that allows me to keep up with inspiration, or the vision of what I’m trying to express. The drawback of this writing style is that my ears don't always pick up on errors my eyes would, particularly misspelled words that sound the same but are spelled differently (to, two, too; through, threw; etc...). I was never a good student, so grammar is sometimes an issue and I rely on my circle of friendly critics to help me clean that up.
When my contact at the publishing house first contacted me about the idea of putting together a book proposal he was quite clear that he didn’t want it to be about the mountains. He loves the mountains but is aware that there is a limited audience when it comes to writing about them. To be sure they play a huge role in my book, but he'll be happy to know it is coming out just as he hoped it would, I believe.
In his explanation at the time, “Dogs sell.” Indeed they do: Marley and Me; Merle’s Door; A Good Dog; A Dog’s Year; and most recently, Tell Me Where It Hurts.
I could not have constructed a book about a dog if I had wanted to if I didn’t have an actual story to tell. And I think my experiences and relationship with Atticus was something this fellow picked up on when he read my columns in my old journal. That’s why he approached me. But when he did approach me, it was before our first Winter Quest took place. He approached concerning that first adventure and wanted me to write about it. But then it took place and Atticus went blind (mostly) and then I thought I may lose him to cancer. It’s ironic that Atticus' hardship and my heartache actually adds to the story I have to tell.
My little focus group, the ones who read the finished first chapter throughout the weekend had some good feedback. They were not without helpful criticism, but for the most part they were moved by what they read. The one email which sums up the majority of the responses follows:

When you've told me of your adventures in the past I have always been moved, but not like this. I now have a deeper understanding of the bond you and Atticus have and yet it is something I will never understand, which makes it all the more interesting and strangely thrilling. It's unattainable yet the soul grasps it, the heart is full and the spirit is moved.

I will have to read it again if you really want me to pick it apart but, honestly, I don't think there's a whole lot to be picked. You accomplished the goal of inviting the reader into the adventures of a profound relationship that happens to take place in the mountains... and not the other way around, an adventure in the mountains that happens to have a cool dog in it.

I laugh when I think of what the hiking community, those who know that I’m writing a book, will think when they read it. They are probably the small majority of book buyers the publisher didn’t want me to focus on. They would be happiest, I’m sure, if I focused on the best routes up Moosilauke, or the Owl’s Head slide, or perhaps any of the Bonds Traverses we have done in winter and kept my emotions out of it, but that is something I'm incapable of doing. They may be a bit surprised that while the mountains play a major role in this book, they do not play the biggest role. Instead, at its heart is the story of a man and a dog.
I can now see that the publisher was right. Publishing is a business. They want a story they can sell, something that will garner them the most money possible. My proposal will be into the publisher next week, but there is a difference now. Before, I wasn’t sure if I could do it and worried about making this particular publisher happy. Now, I know, I really know for the first time in my writing life that I am a writer and I have a story to tell and that if for some reason this particular publisher decides not to run with it, another will.
I cannot tell you how good it is to finally realize that.
(Interesting to note that as I wrote these last few paragraphs the Hallelujah Chorus from Handel's Messiah has been belting out over www.wcrb.com. And that's exactly what it felt like as I wrote what I did.)
at Monday, April 28, 2008