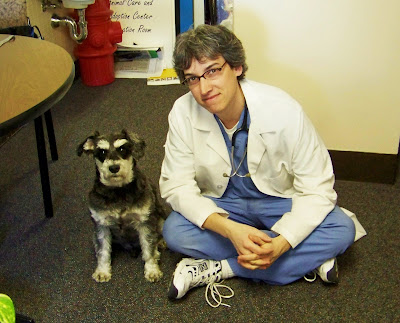 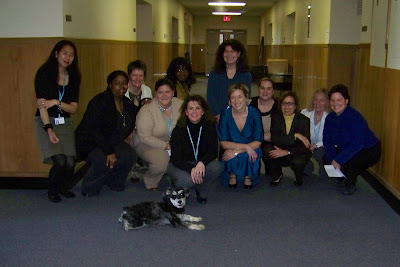 (Photos are of Atticus with several of the Angell Angels
and then with Greg Rappaport, his cardiologist.)
My computer lives. However, with all that took place the other day, it has a lot less on its mind.
In losing nearly everything that was on the computer the one thing I will miss most is the music. When I write, I mean really write, I do so with my ear and not my eyes. Over the years I had collected a wide variety of music, much of it classical or movie soundtracks that can’t help but lubricate my creative side. But those are now all gone. I can always log onto wcrb.com for my classical music fix, but I will miss all those John Williams songs, as well as the soundtracks to the three different Lord of the Rings movies, and numerous other movie soundtracks.
My photos are safe since they are hosted on the web on two different sites and the few songs I had downloaded from Napster have been retrieved. But much was lost. Losing those songs that have been with me for years is leaving some friends behind.
However, I’ve tried to take a positive look at all this. Now I look at my laptop and say “I have a fresh start”.
That fresh start also has to do with our return to the mountains after a few of weekend sojourns to Massachusetts. The last was my father’s funeral. This past weekend, however, I had a much more energizing trip south. Atticus and visited with the good people at Angell Animal Medical Center on Thursday. We’d not met any of them other than Dr. Maureen Carroll and Dr. Greg Rappaport and I must say that it was a wonderful get together. Not only we were greeted by the wonderful Angell Angels, but MSPCA Angell CEO Carter Luke took time out of his busy schedule to visit with Atticus and myself.
They were all warm and welcoming and it felt like a spring thaw after this most difficult winter. All-in-all we spent nearly three hours visiting at Angell. This visit included a lot of friendly milling around and introductions, a tour of the immense facility, and then lunch.
From there it was on to Newburyport for a nice walk on Plum Island and then a quiet visit to the little city we used to call home. Not as much running around this time around but still a pleasant getaway. Other than seeing several friends here and there, the highlight was the weekly Friday night author series at Jabberwocky Bookstore. The author on hand was Angell Dr. Nick Trout. He was there to read from his new book “Tell Me Where It Hurts”. Before he met his public he was generous with his time in chatting with myself and Atticus.
Dr. Trout gave a lively talk that entertained the full house. He also informed me that he had learned earlier in the day that his book had reached No. 34 on the New York Times Bestseller List. I’m sure it is due to climb higher.
I’m reading it now and can assure you it deserves the praise it is receiving. Nick Trout is funny, insightful, edgy and has the ability to tug on your heart strings. During the first chapter I found myself smiling and then later wiping a saddened tear from my eye. I would highly suggest it if you love dogs or animals.
The return trip here signified probably the last time we’ll be leaving and coming back here for a little while. It’s now April and while the conditions here are difficult, between the melting snow and all the ice above tree line, I will fill my next couple of months hiking (at a much more relaxed pace) and writing (at a much more intense pace).
I find myself excited about getting back out there on the trails and in my writing. I feel inspired and ready for the spring and many miles on the trails and many hours writing each day. I expect we’ll be out on the trails again starting tomorrow (Monday).
at Sunday, April 06, 2008