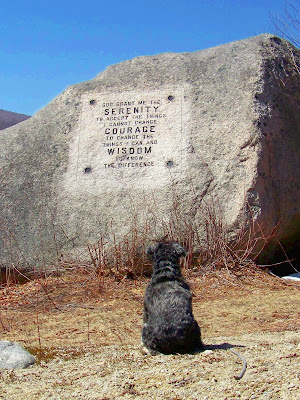 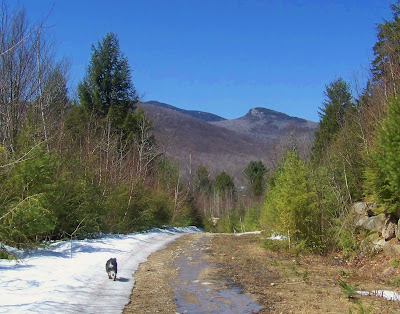 This has been the best writing week of my life. As I wrote to a friend, I finally feel like a writer. You haven’t read any of it on-line because I’ve been concentrating on my book proposal but hopefully you will all be able to read it soon enough, you’ll just have to pay for it. However, this morning my writing was ruined when I received a troubling and angry email and as much as I tried I couldn’t get back to it. So instead Atticus and I took a walk out behind the Pemi Cabins.
We crossed the Pemigewasset River by way of the old metal grate bridge that used to lead to Camper’s World. My father used to take us there in the 70s. It was one of his favorite campgrounds. We’d set up the tent trailer in one of the sites abutting the river and then the four youngest Ryan boys would play in the river, rock-hopping and rock skipping and wading and dunking ourselves. Meanwhile my father would sit on the picnic table looking up at Indian Head and down upon the stream and write on his yellow pad of paper.
I still find it ironic that I now do my writing across the river from where he did some of his.
Camper’s World is no longer recognizable. It’s tangled with overgrown weeds and the existing dirt roads are rutted and in various stages of disrepair. I’m told the campground was sold to a developer several years ago but the developer went belly up. It has since been sold to the Clark family, from Clark’s Trading Post (they of the trained bears). Rumor has it that they hope to extend their railroad ride by a few miles, and if all goes well it will end up behind us up there on the hill. However, nothing has happened up there in years.
Today the main road up the hill was a combination of rotting snow and ice, soft mud, small rivulets of snowmelt, and some terra firma. It climbs steadily after crossing the Pemigewasset for a few minutes and then by turning around to look back where we came from there is a nice view of Indian Head (Mt. Pemigewasset) and part of the Kinsman Ridge behind that.
In my first walk up back a few years ago I came upon “Serenity Rock”. Not sure who carved this out but engraved in the rock is the beginning of the prayer the Theologist Reinhold Niebuhr wrote in the early 1930s for a sermon he gave. Since then Alcoholics Anonymous has adopted the opening. I’m sure you know it well:

God, give us grace to accept with serenity the things that cannot be changed, Courage to change the things which should be changed, and the Wisdom to distinguish the one from the other.

Through the years the original words have been slightly corrupted but that is Niebuhr’s original opening and a close version of it is carved into a boulder at the top of the hill behind where I live. Not many know of its existence other than those who have stumbled upon it. Today, under a very warm sun, the thermometer read a 100 degrees in the direct sun when we returned from our walk, Atticus decided to brush up on his Niebuhr by checking out the Serenity Rock.
It felt like mid summer up there away from the shade. Just past the rock I was thrilled by the jutting summit of Mt. Liberty, a 4,000-footer, peering over the trees at us. Small streams were running down the hill and into little gullies, eventually making their way down to the Pemigewasset. Throughout our walk Atticus stopped at these streams and drank heartily. I know it’s spring again because he refuses to drink from a stream in winter, even if we are on a 24 mile hike. But come spring, summer and fall he drinks early and often.
When we returned to my apartment I tried to write again but couldn’t concentrate so he and I drove down to the Flume again and I walked monk-like while reading as we did. Eventually we stopped at a picnic table and I read while watched the newly arriving birds fluttering here and there. I was in shorts, t-shirt and Keen sandals.
How strange it is up here this week. The air screams July, the snow on the ground says it’s still April. Along the dirt road behind the cabins all the exposed snow has been melted away. But in the shade it’s holding on. At higher elevations there’s still several feet of it (six to eight feet at last report). This afternoon I saw a couple of tourists unloading their bikes at the Flume parking lot so they could ride on the bike path. They made it about 10 feet up the slushy and icy trail before giving up. Not really sure what made them think they could go any farther than that but try they did.
Tomorrow is supposed to be another warm day. Atticus and I will head off to Tuckerman’s Ravine to watch the skiers. I’ve never done this and I’m told it is a circus worth buying ringside seats for. We’ll go with our friends Ken & Ann Stampfer. Ken is a highly-respected ophthalmologist who works out of Mount Auburn Hospital in Cambridge. (My late friend Doug Cray used to see him and was thrilled I had become friends with Ken in my visits up here.)
It helps to have a friend who is good with eyes, even dog’s eyes. Last year Ken was a great help in understanding the cataracts, the surgery and the recovery Atticus went through. He has since been there whenever I panic anew about one of his eyes. The last couple of days Atticus has had some discharge coming out of one of them. Nothing major but it was still a relief to have Ken look at his eye this afternoon and tell me just that.
As you can tell by now, April has not been our hiking month. Hopefully we will be out on the trails a bit more often as the snow melts. I do find myself in wistful longing for hikes on dry, bare ground, wearing a t-shirt and shorts and low-cut hiking shoes. I’m starting to put together my fair-weather hiking wish list. Along with hiking the remaining 4,000-footers on our list I have several other hikes that are starting to bubble up from within. Come one summer! Or at least spring without all this snow.
at Friday, April 18, 2008