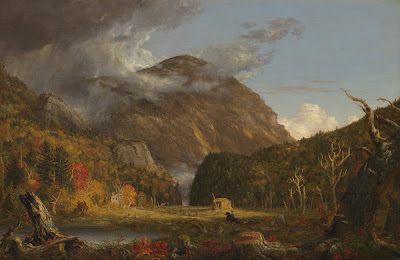 Since I started hiking three years ago I have been drawn to the work of Thomas Cole and the other artists of the early 1800s who became known as members of the White Mountain School or White Mountain Artists. (Ironically Cole would later be credited with founding the Hudson River School and one of the peaks in the Catskills are named Thomas Cole Mountain.)
The Cole painting that resonates with me the most was painted in 1839 and is called A View of the Mountain Pass Called the Notch of the White Mountains (Crawford Notch). The painting is shown above.
Like many artists and writers of the day, Cole was fascinated by the Willey disaster. This is a synopsis from Wikipedia:

“On 28 August 1826, torrential rains in the White Mountains caused a mudslide on Mount Willey. The Willey couple, with their five children, lived in a small house in the notch between Mounts Willey and Webster. They evacuated their home with the help of two hired men to escape the landslide, but all seven Willeys and the two hired men died in the avalanche. They were buried in a mass of earth, stones, and trees while their home miraculously survived. Rescuers later found an open Bible on a table in the Willey home, indicating that the family retreated in haste.”

Thomas Cole depicted his version of the scene just before the horror started. Here’s what it says about the painting on the website for the National Gallery of Art:

Crawford Notch gained notoriety in 1826 when a catastrophic avalanche took nine lives. Nathaniel Hawthorne wrote a short story commemorating the tragedy, which may have piqued Cole's interest in the New Hampshire site. Rather than concentrating on the human drama, the artist minimized figurative elements to underscore man's insignificance and vulnerability in the face of nature's unleashed fury. Amid a seemingly idyllic autumnal setting, the barely discernible settlers, a lone rider, and the stagecoach passengers all seem oblivious to the impending cataclysm. Only the brooding storm clouds gathering at the upper left offer a portentous hint of the disaster to come.

In addition to its oblique reference to a specific historical event, Crawford Notch also reflects a prevailing romantic belief: that the destruction of America's virgin forests was tantamount to sacrilege. By juxtaposing gnarled trees with freshly hewn stumps, Cole vividly underscored the environmental consequences of man's conquest of the wilderness.

For me, that second paragraph says so much and is not unlike my line of thinking. I'm not saying this disaster was brought on by man's attempts to tame wilderness but the painting by Cole portrays an almost Pantheistic belief. No wonder I feel like I can relate to Thomas Cole.
For those wishing to see more wonderful paintings of the White Mountains from that era, check out this wonderful slide show from the New Hampshire Historical Society.
at Sunday, April 13, 2008