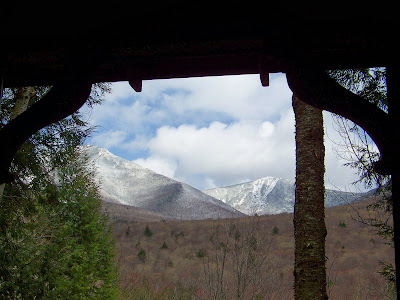 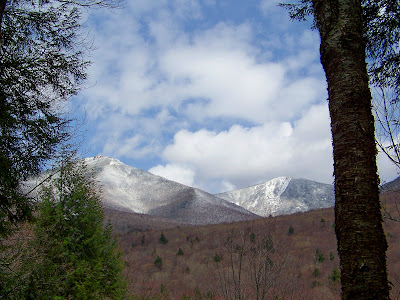 The Little Bug and I took a quick break from my writing and his napping to head down to the Roaring River Nature Path down off the Flume Visitor Center parking lot. It’s only 0.3 miles through the woods, but at the far end is a wonderful little gazebo that looks down at the Pemigewasset River and up at Liberty and Flume.
We didn’t walk very far, but I brought a book along with me and let Atticus go sniffing through the woods while sat in the gazebo, half reading, half daydreaming.
Liberty and Flume both have new layers of snow on them. They received more than six inches of snow, I believe. It won’t last long, not with May knocking on the door, but it sure looks mighty pretty from where I was sitting. The photos above are from within the gazebo.
at Wednesday, April 30, 2008