Spring Is Here! Almost Time For The Atti-Cycle 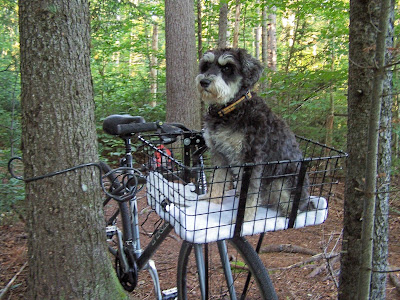 (Atticus in the Atti-Cycle. And while he's not happy about
posing for this shot, he usually loves the free ride.)
A rather Republican curmudgeon back in Newburyport with a doubting and furrowed brow, once asked how I was able to do the long hikes I claimed Atticus and I did in the summer.
“They go from one end of the mountain range to the other,” he said in his most suspicious voice. “How is that possible since it’s only you and Atticus? How do you get back to your car?”
The answer was and is quite simple. Either Atticus and I leave my car and get dropped off by friends, or else we use the Atti-Cycle. When the beginning and ending trailhead is no longer than 10 miles away from each other and I cannot get a car spot from another hiker, I bring our bike along. I park my car where we will end the hike, then pedal to where we will start the hike.
I had my simple Trek Hybrid equipped with an extra-strong basket on the handlebars. In the bottom of the basket I fold a comfortable but old fleece blanket and I place Atticus on top of it. There he sits, a floppy-eared hood ornament, facing towards where we are headed. On occasion, typically when we are headed uphill and I am sucking wind, gasping for oxygen to get to my lungs, he’ll look back at me as if to say, “Do you have to breath like a pervert?” But other than that he keeps his eyes on where we are going.
I wasn’t sure how well he would take to this when I first got the bike but he picked it up brilliantly. The very first time I put him in the basket he sat there like ET, an erect and proud little navigator.
In Newburyport our biggest challenges were the potholes. But we soon found a way to handle the bigger bumps. When I see a pothole coming, or railroad tracks, or anything that will cause a bump in our smooth ride, I say “Bump!” and Atticus lowers his center of gravity just the slightest bit, ready for the inevitable jolt to his system. Then when we are free and clear he stretches out again.
I think I’ve had the bike for three years now and while we don’t put too many miles on it, we’ve never had an accident. (Knock on wood.) There are, however, drawbacks. From time to time an unoriginal dolt will call out, “Hey Dorothy, is that Toto?” I call out something in return, but usually only after the fifth or sixth time I hear this joke. Unfortunately this is a family site and I can’t write what I use as a response.
If you are hiking in the area this summer, and get an early start, you may see the two of us bicycling down the road. It is, I’m sure, a most unusual sight. I can remember two summers ago when I parked the car at the Oliverian Brook Trailhead and then pedaled the bike down to the Pine Bend Brook Trailhead one early summer morning. Truckers along the Kancamagus had a hard time believing their eyes.
Say what you will about how silly it looks, but it works, and it allows us to take many long hikes without having to get others to join us. I hear over and over how bigger dogs make better hiking dogs than little dogs. Well, I've yet to meet another dog, big or small, who can fit in a basket on a bicycle and stay in it.
at Thursday, April 10, 2008

I keep coming back to this post and smiling at the picture. I hope to see you two pedaling along a road this summer heading to a trailhead. April isn't much fun in New England is it? We're off to Chile next weekend for a week--we'll do some little hikes around my brother's town which is in the mountains and then attend his wedding. Maybe bigger hikes on my next visit.

I love this shot. Have you taught him how to pedal, too?

Beth, April is indeed the cruelest month...for hikers anyway. Interesting to hike Pemigewasset in shorts and snowshoes the other day and still posthole on the way down. Enjoy Chile!

i love this picture! makes me wish i could fit the dalmatians in my bike basket :)

Keya, this is one of the advantages of having a smaller dog, not as much as advantage as smaller poop piles to clean up mind you, but still an advantage. I'm still impressed that you drove from Florida to Arizona in mini cooper with your two dalmations!