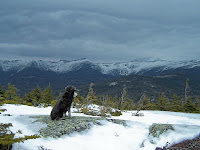 I don't mind if Atticus gets cold, as long as he doesn't get too cold. I don't mind if Atticus gets wet, so long as he doesn't get too wet. But I don't want a marriage of both together under any circum-stances. So we didn't hike this morning, through rain/mist/ fog. We'll hike tomorrow instead...the Willey Range. That will give us three peaks for the day.
For those of you following along who are not used to peak-bagging, there are some hikes where you get only one peak. And then there are others where you can string a couple or a few together. Up to this point we've been on four hikes but only have hit five peaks. You don't have to be a mathematician to realize that we need to average a fraction over a peak a day to get done two rounds of the 48 in 90 days.
The bad news is that we're behind schedule. The good news is that we're just fine and it's not serious. Hiking only every other day has given me time to rest my knee/calf problem and get stronger. It also puts us in good shape for the coming week which looks to be good weather. Resting the problem leg has given me the opportunity to see to it that it will not nag me throughout the winter (knock on wood). It's also allowed me to hike four out of the first eight days. If the Willey Range goes well tomorrow we'll have eight peaks in nine days. Then if we can string together a few days in a row we'll be back on top of the game again. So much of winter hiking is strategy.
This afternoon, after the precipitation stopped, we were left with a bit of a sloppy mashed potato snow that is not much fun to snowshoe on. It's doable but the rain stopped late enough in the day that I just figured we'd wait until tomorrow to hike.
I will now admit to being very concerned about my knee a week ago. When we finished the Hancocks that first day I could barely walk that night. I really needed a day off afterwards. Then Tecumseh on Christmas Eve was equally troubling. But lots of stretching and using the balance ball and a sturdy foam roller on my tense muscles and joints has been good medicine for me. The hike up Moosilauke was the first hike where I felt very little pain. Then yesterday on Waumbek it was the same way. Just sitting her I feel tenderness in my knee, but it is more soft tissue than bone or ligament, which is a good thing. I now feel confident all will be well.
In my work as a student athletic trainer years ago we used to tell the wrestlers at the University of Iowa, "There's a difference between hurt and injury." During those first two hikes I felt like I was injured. During the last my body didn't feel injured, only hurt; and that's a good thing.
I will also admit to being very excited about the rest of the winter. A week ago I couldn't say the same thing, not completely. Oh, I had glimpses of it, but nothing like this. Now I feel like we are in the game and whatever happens from this point on, now that I know my knee won't be holding me back, is sure to leave me with a lifetime of memories.
PS: I've already heard from a few folks that they couldn't figure out the song of the music in the second slide show. That's good; some of them are supposed to be difficult. I don't expect anyone to get the first seven correct and win the contest that way. I imagine it could take 8, 10, maybe 12 for someone to come up with seven correct answers. Some will be easy, some difficult, some will have some correlation to the hike that is evident, some not so evident, and some will only be paired with the slide show because it matched a mood for the hike or the day. The first one was not random. The second one was chosen because it has something to do with this winter. That's the only clues you are getting from me at this point.
at Saturday, December 29, 2007